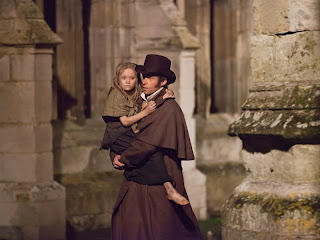 I have a long-running love affair with the Oscars. I love the ceremony, with its ridiculous dresses and  unbelievably inflated sense of pomp and importance. I particularly like that they are essentially an annual barometer for Hollywood. They're not and have never really been an accurate measure of what's good. What they do accurately represent, however, is how the industry - particularly its actors, who form the majority of the Academy's voting members - is thinking.
This year's awards are particularly interesting because for most of the races it's actually quite difficult to decide which nominee is most likely to win. Many years the awards are pretty much a foregone conclusion. This is not one of those years. (Full nominations available here.)

In a self-indulgent move - because let's face it, all my posts are pretty self-indulgent - I've decided to have a look at some of the categories this year and try and guess who's going to win. First up is Best Actor.
This is Bradley Cooper's first Oscar nomination, and he's making an admirable progression from TV supporting actor (Alias) to comedy star (The Hangover, The A-Team) to active actor/producer (Limitless) to critically acclaimed "serious" actor (Silver Linings Playbook). Despite the praise for his performance, my guts says this isn't his year.

Daniel Day Lewis is, of course, one of the most widely acclaimed and respected screen actors of all time. This is his fifth Best Actor nomination (the other four being for My Left Foot, In the Name of the Father, Gangs of New York and There Will Be Blood). He's won twice, and if he wins a third time next month he will become the most awarded Best Actor in Oscar history (he currently shares the record of two with another eight actors including Spencer Tracy, Marlon Brando and Tom Hanks).

This is Hugh Jackman's first nomination, but of course he did present the Oscars a few years ago. Jackman is ridiculously beloved in Hollywood, and I've always had the feeling that the Academy was simply waiting for him to perform in a worthy role so that they could shower awards on him for it. He's my pick to win this category.

Joaquin Phoenix, however, makes for some very strong competition. This is his third Oscar nomination, following Best Supporting Actor for Gladiator and Best Actor for Walk the Line, and there's a very good chance he probably deserved to win for the latter. If there's one thing the Academy loves, it's giving an award to actors because they feel "it's due". This may be his year, although the relative unpopularity of The Master probably damages his chances a little.

This is Denzel Washington's sixth Oscar nomination, following nods for Cry Freedom, Glory, Malcolm X, The Hurricane and Training Day. He won for Glory (Best Supporting Actor) and Training Day (Best Actor). Actually, Washington is a great example of what I was just writing about: his performances in Malcolm X and The Hurricane were clearly more deserving of an award than Training Day, but for that film the Academy felt a Best Actor award was due to him. He's a safe choice, which works in his favour.

My pick: Hugh Jackman
Posted by Grant at 9:52 AM