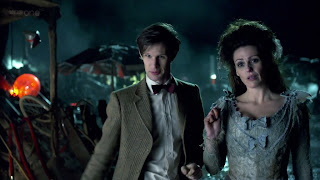 Who50 counts down to the 50th anniversary of Doctor Who by reviewing my favourite episodes and serials over the history of the programme, counting down from #50 to #1. Today, #41: "The Doctor's Wife", a 2011 episode written by Neil Gaiman and directed by Richard Clark.

The TARDIS is out of time, trapped in some pocket dimension outside the known universe. The planetoid that the Doctor, Amy and Rory are on appears to be alive. Their only company are three strange individuals seemingly stitched together out of patchwork - and Idris, a mysterious woman who doesn't seem right in the head and thinks the Doctor is a thief.

"The Doctor's Wife" is fan fiction writ large: it takes several core elements of the series, takes a series of assumptions Doctor Who fans have always made about them, and turns them into part of the series text. It's hopelessly self-indulgent, slightly rushed, and utterly charming.

The episode gained an awful lot of hype and audience anticipation because it was written by fantasy novelist Neil Gaiman, whose achievements as a writer are second only to his remarkable ability to develop a cult-like fanbase. Like Joss Whedon, he has a personal fandom to rival those of entire film franchises. Like Joss Whedon he's a very talented writer. Like Joss Whedon, he's not always quite as good as his fans claim he is, and has a tendency to be defensively overrated.

So this episode isn't perfect, but it is a very delightful exercise in enabling the Doctor to actually sit down and have a conversation with his longest-running companion: his own TARDIS. Suranne Jones is absolutely fantastic as Idris, the TARDIS consciousness squeezed into the body of a dead woman. She's scatty, non-liner, besotted with the Doctor - and, to be honest, he is with her as well. We finally get confirmation that, as the Doctor thinks he's travelling at random and always winds up where he's needed, that it's his TARDIS that is deliberately guiding him there. It takes a near-50 year-old contrivance and straightens it out into a sensible bit of plot.

Other elements of the episodes - particularly Amy and Rory's ordeal inside a kidnapped TARDIS - are less successful, but when the core conceit is so delightful it's hard to care too much. It's an advertising cliche for a TV show to promise that 'after this episode, you will never see X the same way again', but in this case it's absolutely true. You can't see the TARDIS in the same way again. Gaiman managed to make her a proper character, and somehow even more magical - because sometimes Gaiman's not defensively overrated by his fans. Some times he's actually that good.
Posted by Grant at 10:46 PM