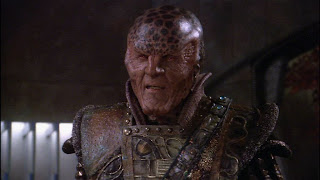 The ageing Centauri emperor makes his final journey, visiting Babylon 5 on a very special mission. At the same time, Lord Refa and Londo Mollari conspire to redirect the future of the Centauri people. Ambassador G'Kar has assassination on his mind. Garibaldi receives an important message from an old friend.

"The Coming of Shadows" just might be the best Babylon 5 episode so far on this rewatch, and I'm not surprised it was awarded the Hugo for Best Dramatic Presentation. It's a nuanced, heartfelt, political and ultimately very tragic hour of television. The best tragedies work by putting victory within arm's reach, only for one person's hubris to snatch it out of their grasp. This episode is absolutely heartbreaking, and in one critical moment Londo Mollari looks at G'Kar and realises he's given it all away: his future, his life, his honour and his happiness.
What's particularly interesting is seeing how Londo and G'Kar effectively swap places. If you go back to the Season 1 premiere, "Midnight on the Firing Line", you discover G'Kar is a belligerent, war-mongering bully and Londo a hapless, luckless victim. Now Londo is rapidly climbing the ladder of power within the Centauri Republic while G'Kar finishes this episode a broken man.


We also get our first introduction to the mysterious Rangers, an invisible army headed by Commander Sinclair (who's still on Minbari) who are preparing to fight the Shadows, and the first proper acknowledgement by Babylon 5's command team that there is another superpower out there, slowly infiltrating behind the scenes. This has perhaps taken a little too long to arrive, but now that it's here the series can starting moving ahead more rapidly.

With any serialised drama, there are going to be episodes that aren't that significant, and there are going to be episodes that are crucial to the unfolding narrative. "The Coming of Shadows" absolutely falls into the latter: it's the lynchpin of the second season and, in grand structural terms, it's the end of the five year arc's first act. The Babylon project was 'our last, best hope for peace', and by the end of this episode that peace is shattered. All the series has left to look forward to is war.

We're up to five good episodes out of nine for Season 2, but this episode is really good. It's ones like this one that make me better understand how Babylon 5's hard-core fans got so excited about the series. The season score, however, stands at 56%.
Posted by Grant at 9:08 AM