Who50: "Vengeance on Varos" 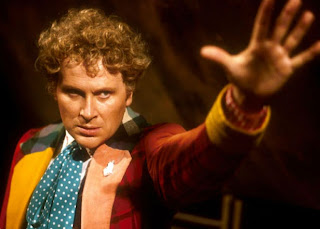 Who50 counts down to the 50th anniversary of Doctor Who by reviewing my favourite episodes and serials over the history of the programme, counting down from #50 to #1. Today, #40: "Vengeance on Varos", a 1985 four-part serial written by Philip Martin and directed by Ron Jones.

Colin Baker really did have an unfair run at portraying the Doctor. First of all he was cast during a rocky period in the series' history where rising violence led BBC1 controller Michael Grade to axe the series entirely - and then rapidly backtrack to delay its return by 18 months instead. When the series did return it was with an episode order than was nearly halved: Fourteen 25-minute episodes instead of thirteen 50-minute episodes. There was also a severe issue with poor script quality: count up some of the worst stories ever produced in Doctor Who's history, and you'll find several of them in Colin Baker's two seasons.

Then there was the Doctor-companion relationship, bizarrely written to regularly have the Doctor and Peri sniping at one another from story to story. The Doctor in general was characterisation as fairly unlikeable: the idea was to make him more alien, and progressively soften him over a period of years. Since Baker only lasted two seasons in three years before being unfairly fired from the role, this progressive softening never got the chance to happen. And that costume: so bright and colourful that to achieve a viewable colour balance, the entire series around Baker had to be garish and colourful to compensate.

Colin Baker's Doctor has been impressively redeemed through a long-running series of audio dramas produced by Big Finish Productions, but in terms of his TV appearances there are precious little highlights to enjoy. One of them is Philip Martin's "Vengeance on Varos".
The TARDIS is in dire need of zeiton-7 ore, and the nearest planet that mines it is the Earth colony Varos. When the Doctor and Peri arrive they find a population addicted to television, where an oppressive government keeps everyone in check with a continuing string of televised executions and torture sessions. The public also get to vote regularly on their approval of the colony's Governor. Should they be unsatisfied, he is tortured in his chair.

What is particularly impressive about "Vengeance on Varos" is how, like Nigel Kneale's TV play "The Year of the Sex Olympics" some years earlier, it foreshadows the rise of reality television so effectively. Martin's creative masterstroke is the addition of Arak and Etta (Stephen Yardley and Sheila Reid), two citizens of Varos who watch the various executions and referenda throughout the serial. They never meet any other character from the story, and act as both Greek chorus and pointed satire of television audiences in general. When the colony's oppressive regime is finally overthrown and the broadcasts cut, Arak and Etta complain that they now have nothing to do. Throughout the story, however, they have been complicit in the torture and murder broadcasts by passively viewing them. They are required to periodically vote, but nobody is forcing them to watch. It's ironic that a serial that so carefully condemns the passive reception of televisual violence is one of the key serials that led to the series being suspended for violence.

And violent it is: one scene in particular has two guards falling into a bath of acid with unexpectedly graphic results. Their deaths in themselves push the envelope of taste. The Doctor's flippant response to their demise tears the envelope completely. This scene annoys me, because so much of the remainder is so perfectly judged and executed (pardon the pun).

The other highlight of "Vengeance on Varos" is Sil, a sluglike green alien who is pretty much the only iconic element introduced to the series during Colin Baker's tenure. He is delightfully loathsome, with his waggling tongue and love for eating 'marsh minnows'. He's petty, cruel, sadistic and more than a little pathetic. He is played (in this and the following year's "The Trial of a Time Lord") by Nabil Shaban, a Jordanian actor with osteogenesis imperfecta. Shaban is a great actor, and I continue to adore him as Sil. He's one classic series antagonist I desperately wish they would bring back in the current series, since he's such a delight to watch.

Colin Baker's era of Doctor Who was generally brash, violent, unpleasant and mean-spirited: a period of hideous mutations, torture, cannibalism, blood and gore and furious shouting matches. In "Vengeance on Varos" these specific weaknesses were miraculously transformed into strengths, creating a wonderfully dark and troublesome four-part serial that stands among Doctor Who's best.
Posted by Grant at 2:18 PM

Email ThisBlogThis!Share to TwitterShare to FacebookShare to Pinterest
Labels: Doctor Who, reviews, science fiction, TV, Who50