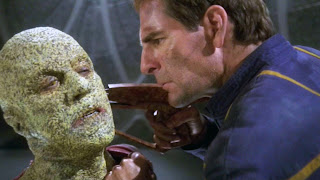 When we last left the crew of the NX-01 Enterprise, the ship was surrounded by Suliban fighters while Captain Archer was lost somewhere in the 30th century with his time travelling ex-crewmate Daniels. And now, as they always said in Star Trek, the conclusion...

Historically speaking, post-1987 Star Trek had a pretty dreadful track record when it came to wrapping up season cliffhangers. The first parts were generally excellent: high concepts played out to apocalyptic levels with audiences left wondering for months at a time how the crew would manage to get out of whatever awful situation into which they'd been thrown. Second parts generally fell flat on their faces or, at the very least, felt pretty underwhelming compared to the preceding episode. Deep Space Nine generally avoided this problem by closing its season with a self-contained episode that remained somewhat open-ended. Enterprise, however, dives straight in and gives an apocalyptic, time-travelling mega-cliffhanger for its first-ever finale. No pressure on the Season 2 premiere, then.
In the latest pleasant surprise in a series full of them, "Shockwave, part 2" continues in exactly the same edge-of-your-seat, gripping fashion that it left off. The Enterprise is invaded by Suliban soldiers looking for Captain Archer, and this leads to a wonderful team effort to retake the ship and escape the hands of the enemy. The easy, likeable manner in which our regular cast work together is in sharp contrast to the fairly rough, inexperience manner in which they worked one year ago.

Meanwhile Scott Bakula gets a surprising number of comedy moments in this episode, as he explores the ruins of a devastated future San Francisco with Crewman Daniels. Not only are the scenes well played, but they include more than one knowing reference to the future for long-term fans. His "lost-in-time" storyline dovetails into the "Enterprise-taken-over" storyline with unexpected ease. I think that's maybe what impressed me the most with this episode: it all holds together remarkably well. It's a very slick, action-packed hour of television.

Silik, the Suliban leader, makes for a great villain, and the antagonist relationship that's been developing between him and Archer is wonderful. There's such an 'old school' feel to so much of this show, and it's actually quite refreshing to enjoy such a clear-cut hero/villain conflict. Bakula in particular seems to be relishing the opportunity to play such an obvious throwback to James T. Kirk.

The episode ends with Archer and T'Pol sharing a moment of friendship, and it's a scene that I adored. This is very much a clear punctuation mark on the end of Enterprise's first year: they started with something to prove, and they proved it. They started at odds, and they're now close workmates and friends. Had this series been made a few years later, where season cliffhangers have overwhelmingly been replaced by season finales, this would have been the last episode of Season 1 - and it would have been a fantastic one at that.
Posted by Grant at 8:36 PM