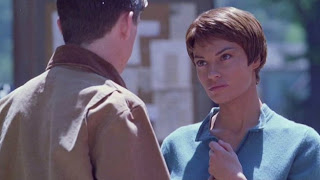 Over dinner T'Pol tells Archer and Trip the story of her great grandmother T'Mir, who crash-landed with her Vulcan crew at Carbon Creek, Pennsylvania, in 1957. At first it seems the crew is trapped on Earth for good, but when a rescue team makes contact T'Mir is surprised to learn her crewmate doesn't wish to leave.

"Carbon Creek" is one of the most bizarre episodes of Star Trek I've ever seen. Pretty much the entire story is a flashback to 1957, with Jolene Blalock playing both T'Pol and her great grandmother T'Mir. It's a strange, self-contained story that rewrites a bit of Star Trek history while providing an unusual cross-species love story at the same time.

And I hated it.
I suppose on some level I should appreciate "Carbon Creek". It tries something new, which is never a bad thing. The problem is that the execution is a bit sloppy, and the script (by Chris Black) is filled with cliches and stereotypes. The intention is clear: follow up the continuity-heavy, action-packed season premiere with something light and unusual. The final result just irritated me.

Jolene Blalock does a great job playing T'Mir, a visibly different sort of Vulcan to T'Pol. I'm not as convinced by the episode's supporting cast. J. Paul Boehmer plays the lovestruck Mestral, who strangely comes across as a little mentally challenged, rather than as a stoic, intellectual Vulcan. To be fair Ann Cusack (sister of John and Joan) does her best in the role of Maggie, the object of Mestral's affection, but she hasn't been given anything decent with which to work.

This episode is eminently skippable, and as the next episode is pretty damn good that's exactly what I recommend you do. Season 2 drops down to being 50% good. For now.
Posted by Grant at 9:06 AM