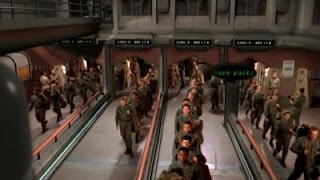 Babylon 5 is unexpectedly visited by the EAS Schwarzkopf. 25,000 Earthforce soldiers are to temporarily billet on the station, en route to a secret mission. They are commanded by General Richard Franklin (Paul Winfield), Dr Franklin's estranged father. Their arrival leads many to question the station's future purpose: can a station dedicated to diplomacy afford to host Earth's military, even for two days?

What an odd title. When I first saw it I figured Gropos was a planet or a person. Instead it is the plural of 'gropo' ('Ground and pound'), the nickname given to the Earth Alliance's ground troops . Basically the space marines have come to stay at the station for a few days, to indulge in their penchant for tedious cliches.
The episode's main guest star is Paul Winfield, an Academy Award nominee and a mainstay of genre film and television. He had previously played Captain Terrill in Star Trek II: The Wrath of Khan, as well as the alien Captain Dathon in the widely acclaimed Next Generation episode "Darmok". He had also appeared in Damnation Alley (1977), The Terminator (1984) and The Serpent and the Rainbow (1988). He's a great actor, but here he's saddled with scenes that wouldn't be out of place in the average daytime soap opera. He's a military man - his son is a doctor. He kills for a living, his son heals for a living. They don't get along at all, and so on and so forth. Their damaged relationship fills much of the episode, and as a result much of the episode is filled with drumming one's fingers, patiently waiting for something interesting to happen.

Meanwhile Warren Keffer is forced to billet with two gropos in his quarters. Remember Keffer? He's that pilot that Straczynski put into the series upon instruction by the TNT network, which Straczynski clearly hates. He hasn't been around in ages, but since Straczynski didn't write this episode (Lawrence G. DiTillo did) Keffer gets to turn up. I feel sorry for Robert Rusler: he gets cast in a syndicated TV drama, and its showrunner visibly despises his very premise. Sadly Keffer's storyline is even worse than Franklin's: he hates these marines in his quarters, and by the end he's drinking beers with them and promising to see them when they get back.

Finally Garibaldi almost has a one-night-stand with a female marine, but when he turns her down at the last moment she gets very upset and talks about how she might die tomorrow. And tomorrow she does die. They all do. There's a garish tableau of dead soldiers among fire and smoke, because - and I'm assuming DiTillo didn't think you or I knew this, but war is bad and people die. It's the ending of this episode that irritates me the most, because director Jim Johnston has shot it as if something terribly meaningful and profound has been expressed when in reality it's been as profound as the ingredients list of a carton of cornflakes. (Warning: may contain corn.)

This episode is dreadful, boring, hackneyed, cliched, dull, tedious - pick a word. Whatever word it is will be more interesting and original than the episode it's describing. Ten episodes into Season 2, and exactly half of them have been worth watching. That's a progressive season score of 50%.
Posted by Grant at 7:08 PM