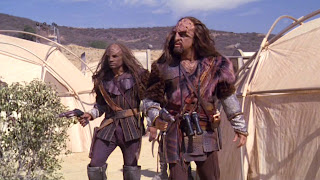 The Enterprise is in dire need of deuterium fuel, following its collision with a Romulan mine some weeks back (see "Minefield"). Archer, T'Pol and Trip take a shuttlepod down to a mining colony in the hopes of making a trade. What they find is a colony living in fear of a roaming group of Klingon warriors, who are exploiting the villagers for their deuterium. Unwilling to let a bully stand, Archer decides to wait for the Klingons to return and help the colonists to fight back.

Let's be fair from the outset and agree that "Marauders" doesn't do anything wrong. It's perfectly competent. The script makes sense. The actors are all believable and engaging. It's got Starfleet officers having gunfights with Klingons, which is a nice old-school thing to include. The problem is that while the episode doesn't do anything wrong, it also (and I'm sure you're anticipating this) doesn't do a single thing that makes the episode worth recommending.

This is an episode that doesn't even have a remotely interesting idea for its plot: it's The Seven Samurai, and among all the other examples I listed above it's probably the least accomplished adaptation of that story. There's no long-term implications to this episode that I can see, and no particular satisfaction coming from its conclusion.

So I say, if you're reading this wondering whether or not you should watch it, you really don't need to bother. It's dull, throwaway television, destined to be forgotten as soon as you... wait, what was I writing about?

Six episodes in. Three have been good. Enterprise Season 2 currently scores 50%.
Posted by Grant at 9:44 PM