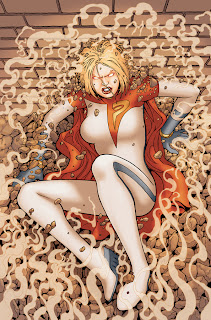 DC Comics is relying on an awful lot of backup pencillers to get their books over the line. It's an issue that affects several of their books this week alone. Action Comics, Animal Man, Stormwatch, Worlds' Finest... all rely on more than one penciller to get the book completed. In the case of Worlds' Finest it's taken three. It's not a good thing, as it creates a visual inconsistency that jars the eye. I can't immerse myself as fully as I want to into a story because from page to page the characters and setting are subtly different.

The reason for using back-up artists is usually deadlines: the regular artist isn't going to make his or her deadline, so a group of artists are dragged in to make sure the art is done in time for the book to go to print. DC in particular has been very firm on their comic books shipping on time, and in the 18 months since the New 52 commenced I think they've missed maybe one deadline (an issue of Justice League, from memory).

Is it just me, or would it be better in the long run to let comics occasionally run a few weeks late? I'd rather a comic drawn by a single artist than one drawn by two or three. It would improve the consistency and quality of the book, serve the eventual trade paperback collection much better and have a more positive long-term impact on sales. Not receiving the comic I ordered on time is irritating, sure, but not actually getting the comic I was promised? That's even worse.

Grant Morrison's Action Comics run draws ever closer to its conclusion, as Superman's past, present and future collide with one another and Mister XXX's masterplan becomes clear. This issue features a guest appearance by the Legion of Super-Heroes, albeit a different version of the characters to the ones seen in their own comic. It's all a little confusing, and brings with it a sense of "been there, done that" in regards to Morrison's superhero work. In a little tit bit of New 52 history, it turns out that Doomsday killed Superman in his second year of being a superhero - for whatever that's worth. (3/5)

Oh good god why am I still buying this comic? I'm trapped in a ridiculous and awful situation: after starting off which such promise - it was one of the best-reviewed books in the New 52 - Animal Man has dragged out into a painfully slow, intolerably dull saga of rotting monsters and gloating villains. The awful part of the situation is my indecision over whether or not to quit. If I quit now, it feels like I've wasted my money for the past 17 months. If I keep reading, and it doesn't pick up or improve, then I'm throwing good money after bad. As it stands, "Rotworld" can't end soon enough. (1/5)

Batwing goes after a rich white kid who's billionaire father has managed to bribe and influence his son out of trouble for years. This is a great issue, kicking off a new art for Batwing and continuing the book's nice combination of superhero action and contemporary African issues. Police corruption is the big issue being tackled here. Fabrizio Fiorentino delivers some great art this issue, and Pete Pantazi's colours highlight it wonderfully. Sales are still dropping on this book. I'm concerned it won't have more than another six months or so left to it before DC pulls the plug. (4/5)

I love weird comics. I think they're great. Any time a writer and artist get a bundle of weird ideas and throw them around a book with reckless abandon, I'm right there reading it. That said, weird comics only work if there's some kind of logical through-line to guide the reader around it. Change is filled with beautifully odd ideas and concepts, and great expressive artwork. The problem is that it just doesn't make any sense: it lacks a hook to pull me through, and subsequently it's more frustrating than enjoyable. It's only a four issue miniseries, so it's not too great a pain to buy the last two issues and see if it all reads more sensibly as a complete work. (2/5)

Jason Fabok is producing some eerily Gary Frank-esque artwork in this issue, which is no bad thing I suppose. This issue manages to be a subtle and elegant tie-in to "Death of the Family", in that it deals with the masses of mentally ill people, low-level street hoods and naive rebels who flock to crime in Gotham whenever the Joker is around. It's a great concept, and comes with huge amounts of story potential. I'm less sure about the ongoing development of this new Emperor Penguin character - the Penguin himself is usually a fairly hard sell, and a spin-off from him seems even less likely to succeed. (3/5)

This continues to be a nice, neatly constructed superhero story. It's not going to set the world on fire, it's not going to change anything, it's probably not going to be remembered by many people within six months' time. Sometimes, however, it's just nice to read an enjoyable comic. Gray and Palmiotti's re-imagining of the Human Bomb is rock solid - it's particularly good that he's no longer encased in a bulky, anonymous suit - and Jerry Ordway's old-fashioned artwork serves the story above all else. (3/5)

Okay, here's the thing: we're 17 issues into Stormwatch (including #0). They're supposed to be a group of guardians secretly watching over the Earth, except for almost 18 months they've pretty much done nothing. There's been much action, and shouting, and betrayal, and high drama, but it's like watching a pack of teenage drama students run around in circles shrieking at one another. There comes a point when you need to snap and start screaming "What is the fucking point?!" at a wayward comic book, and I think that time is now. This is a book with no purpose, full of sound and fury, but (like Bill Shakespeare says) signifying nothing. (2/5)

Jason Aaron and Esad Ribic continue to knock the ball out of the park with this one. It's the sort of concept, story and art you'd expect to see in a self-contained graphic novel, but instead this is a monthly comic. This instalment, the fourth of five, draws the three plot threads together - in one case in the most surprisingly direct of ways - and sets everything up for the finale in February. I am absolutely adoring this comic. It is far and away the best book of the Marvel Now relaunch and, probably Hawkeye aside, the best superhero title Marvel is currently publishing. (5/5)

This messy, unfocused issue absolutely feels like a last-minute fill-in. The Huntress gets shot out of the blue by a hit squad because of her actions all the way back in the Huntress miniseries, and this sets Power Girl off to threaten the man who's put a price on her head. This book took three pencillers to get over the line, and at only 20 pages of art this beggars belief. It makes the book a very jumpy, uneven read. I appreciate DC Comics are intent on never delaying a comic book, but surely it'd be better to skip a month and have a great issue #8 in February, than to churn out disposable stuff like this and annoy your readership? (2/5)

There is something quite wonderful about watching a hit squad of X-Men come to take down David Haller, and then to watch Haller take them all down one by one with his vast array of super-mutant powers. Simon Spurrier is writing a great X-Men book here, with a fantastic hook and a lot of inventive material. The new mutant powers he develops this issue are hilarious. We're four issues in now, and to be honest my opinions of the book haven't changed: it's fantastic, but it's a story that reeks of cancellation. I plan to enjoy it fully while I can. (4/5)

Winner of the week: Thor: God of Thunder continues to wow me.
Loser of the week: Animal Man, on the other hand, seems to disappoint me more every month that I continue to feed it money.