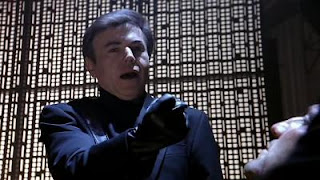 A secret "railroad" operation is sneaking rogue telepaths away from Earth and the PsiCorps via Babylon 5. This sends the Psicop Alfred Bester back to the station on the hunt for telepaths, criminals and traitors - and one or more members of Sheridan's crew may be in his sights.

"A Race Through Dark Places"... that's a wonderfully pretentious title in a series full of ridiculously pretentious titles. Don't get me wrong - I adore pretense and floridity when it comes to naming things. Go look up the BBC's Star Cops and some of the wonderful episode titles it used. This episode of Babylon 5 has a brilliant title. It's one of my favourites in the five-year run of the show.

Walter Koenig is back, gleefully playing the role of Bester by crawling up the walls and chewing holes in every reachable surface. If I am to be completely fair, I've never thought he was a particularly good actor: he throws himself into his roles with great gusto, and there's understandable affection for the two roles he's best known for (this and Star Trek's Pavel Chekov), but he's not exactly a performer with an extensive range. In this case it doesn't really matter, because Straczynksi is clearly in love with the character and gives him most of the good lines, and to his credit Koenig is probably giving the best performance of his career. It's theatrical, but enjoyable. Watch the opening scene, and the glee with which Bester grabs the dying telepath's final memory. This is pantomime villainy, but the series gets away with it because I think we're complicit in how much fun Bester is.


I find the core plot of this episode a little problematic, however: Dr Franklin is leading a highly illegal railroad operation under Sheridan's nose, which makes Sheridan look a little incompetent (not to mention Security Chief Garibaldi) and doesn't really feel like the sort of behaviour one would expect from Franklin either. It's grounds for prison, or at the very least a quiet and dignified retirement from the Earth Alliance service, but instead Sheridan seems to go along with it as well.

Much of the main narrative draws on the Season 1 episode "Mind War", in which the rogue telepath Ironheart gifted Talia with telekinesis and the ability to shield her mind from other telepaths. I want to cheekily write "I can't wait to see where this goes!", but with hindsight I already know this plot thread leads absolutely nowhere. It's therefore a little hard to get worked up about it the second time around. I also have a few doubts about the episode's climactic solution to keeping the railroad secret: surely sooner or later Bester's going to realise he's still got a full clip of bullets in his gun?

Some important arc stuff goes introduced here: Ivanova and Talia's icy relationship visibly softens, and Delenn asks Sheridan out on a date. Season 2 has staggered out of the gate, but it does feel like we just might be starting to go somewhere. One other note worth considering: "A Race Through Dark Places" was intended to air before "Soul Mates" - seeing those episodes the other way around allows Talia's character arc to run more smoothly.

Thumbs up, not enthusiastically, but I certainly didn't feel as if my time was being wasted. That makes four good episodes out of eight: 50/50. For the time being, Season 2 is now officially more enjoyable than Season 1.
Posted by Grant at 6:33 PM