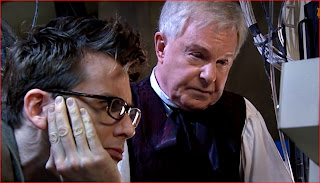 Who50 counts down to the 50th anniversary of Doctor Who by reviewing my favourite episodes and serials over the history of the programme, counting down from #50 to #1. Today, #47: "Utopia", a 2007 episode written by Russell T Davies and directed by Graeme Harper.

For the most part, "Utopia" is a curiously small-scale and sedate episode of Doctor Who. The Doctor and Martha stop off at the Cardiff space-time rift in order to refuel, leading to a reunion with Jack Harkness and a runaway trip to the year 100 trillion. There, on the planet Malcassario, the kindly Professor Yana and his insectoid assistant Chantho work to save the last of the human race from the cannibalistic Futurekind.

It's a rather nice episode all told. The Doctor and Jack finally get some time to discuss what exactly happened when the Doctor abandoned Jack, and Jack subsequently found himself an immortal government agent living in 19th through 21st century Earth history. Martha befriends Chantho, who is an absolutely wonderful and engaging character. Professor Yana potters around preparing to send a rocket of humans to safety, all the while complaining about a strange drum beat he's heard in his head for as long as he can remember.

Then Martha finds a pocket watch...

One of the core elements of the original Doctor Who series (1963-1989) was the cliffhanger. It was a hangover from the old days of serialised cinema: each episode of Doctor Who would last 25 minutes, at the end of which events would spiral into a live-or-death climax to be resolved the following week. This approach worked fine when the series was broken up into four or six-part serials, but when Doctor Who was revived in 2005 it was as a series of primarily stand-alone 45 minute episodes. There were usually a few two-parters each season, but it really felt as if this wonderful aspect of the series was pretty much done and dusted.

Then Martha finds a pocket watch, and for the next ten minutes viewers were treated to the best cliffhanger in the history of Doctor Who. The pocket watch we had seen in a previous story, "Human Nature", so we - and Martha - immediately recognise it as a sign Professor Yana (Derek Jacobi) is actually a Time Lord. Martha's excited, and runs to tell the Doctor. We're excited, but also horrified, because even viewers only casually familiar with the history of the series know exactly who Professor Yana has to be.

So while Martha runs to tell the Doctor, Yana lifts up the pocket watch. He can hear voices in his head - long-term viewers recognise them immediately as Roger Delgado and Anthony Ainley, both actors to have previously played the same iconic role. When Martha tells the Doctor what she has found he sprints back to Yana in a panic. He's guessed what we already know: the Master has returned to Doctor Who.

The Master brutally murders Chantho before the Doctor can get there. She manages to get a shot off with a gun, mortally wounding him, but by the time the Doctor comes skidding into the laboratory he's already locked himself inside the Doctor's TARDIS. Then - while we're still reeling at the fact that Derek Jacobi is the Master - the Master ups and regenerates. It's John Simm (Life on Mars, State of Play), blonde, energetic, and very much the opposite number to David Tennant's Doctor (as Roger Delgado was to Jon Pertwee). He gloats a bit, while the Doctor pleads from outside for him to open the door. And then he leaves. Cannibals are banging down the door. The Doctor's arch-nemesis is back. The TARDIS has been stolen. The Doctor, Martha and Jack are about to die at the hand of a pack of savages 100 trillion years into the future, and there's nothing they can do.

It is to my mind the greatest cliffhanger in the history of Doctor Who. How it's resolved (in "The Sound of Drums") is utterly irrelevant. It's a ten minute-long cavalcade of successive climaxes that, for the unprepared viewer, result in a series of "Oh my god... oh my god... OH MY GOD!!" moments. It's only in retrospect that you realise that the 35 minutes leading up to the climax were so ordinary because they had to be. It's a marvellous act of televisual bravado on the part of writer/producer Russell T Davies. This is sleight of hand in dramatic form, and as a result it's one of Doctor Who's finest-ever episodes.