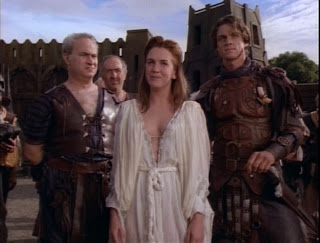 In his second adventure, Hercules agrees to escort a young woman named Deianeira in search of the lost city of Troy. When they finally reach the outskirts of the city the find its population living in refugee camps - and the city itself in the hands of Hera's Blue Priests.

"Hercules and the Lost Kingdom" is the second made-for-television film for Hercules: The Legendary Journeys, first broadcast on 2 May 1994. It is a step up from its predecessor, and provides a more accurate template for the TV series to follow. It's a much more relaxed affair and it's willing to have a laugh at itself. Kevin Sorbo seems a lot more comfortable as Hercules, and the overall vibe is a silly pulp fantasy that wants its audience to have fun.

Just as "Hercules and the Amazon Women" featured Lucy Lawless in a pre-Xena role, "Hercules and the Lost Kingdom" features more Hercules/Xena stars in early roles. Renee O'Connor makes an enormous impression as the fiesty Deianeira (unrelated to Hercules' future wife Deianeira, somewhat confusingly). She gets a lot of the film's funniest moments, including one of my favourites for the whole franchise (in response to "I'm Hercules", she falls about laughing before asking "Your parents named you after Hercules?!"). Also guest starring is Robert Trebor as the obsequious slave Waylin - he later recurs throughout Hercules and Xena in the role of Salmoneus.

There's some fairly lazy plotting going on with this film, since it's effectively a simple quest with a string of action-oriented or comedic set pieces strung along in a row. This might frustrate, but with the film as a whole acting as such a piece of fluff it's hard to be too concerned. It also seems fairly nonsensical in terms of actual mythology: Troy appears to be a name the writers simply grabbed and used, rather than being the actual city of Troy viewers might be familiar with.

This is silly fun: if you're expecting more you'll be disappointed. It's a much better step towards the TV series, however, and would have made a vastly superior first film to the much less accomplished "Hercules and the Amazon Women". It gets my vote, which leaves the TV movies running at 50%.
Posted by Grant at 9:03 AM