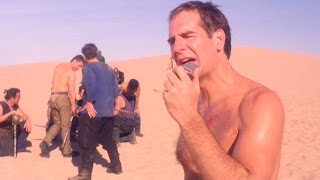 When the Enterprise picks up and repairs a damaged spacecraft, it's enthused owner (Clancy Brown) insists that Archer and Trip accompany him to his home for a thank-you dinner. Once there, they discover they're guests of a rebel leader, and the planet's legitimate government is not impressed.

"Desert Crossing" is a lightweight but enjoyable episode of Enterprise. It follows a trend set by quite a few of Enterprise's episodes: isolate two members of the cast for an hour and let them talk through some character development. It's not a bad strategy in itself, but it does begin to wear a little thin as we near the end of the season.
If this episode was titled like an episode of Friends it would be called "The One Where Archer and Trip Get Their Shirts Off". To be honest the main appeal of this episode (assuming man candy is not your thing) is the opportunity to watch Clancy Brown over-act to a degree I haven't seen in a while. He's no stranger to excessive performances - he is, after all, the Kurgan in Highlander - but in "Desert Crossing" he plays his nomadic resistance leader as if he's Britain's award-winning bellower Brian Blessed.

The initial set-up - Archer and Trip experiencing an alien culture by sharing a meal - is actually really interesting and entertaining to watch. It's a pity they didn't have the nerve to play an entire episode out in this fashion: amiable, relaxed and engaging. Instead there's a government attack on the settlement, Archer and Trip leg it, and the rest of the hour is spent watching them slowly dehydrate as they escape across the desert.

Of course at the start of the episode the Enterprise is still en route to the interminable pleasure planet Risa. Fingers crossed they get delayed next episode as well.

This is a missable episode, but it is all in all a fairly enjoyable one, so "Desert Crossing" gets a thumbs-up from me. That leaves Enterprise with 14 good episodes out of 23 - or a running tally of 61%. (Note: just for the record, this is the 250th post for this iteration of the blog. Thanks for reading.)
Posted by Grant at 5:32 PM