Legendary Blogging #3: "Hercules and the Circle of Fire" 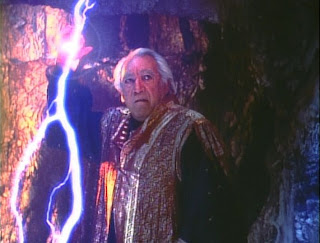 You can say one thing for the Hercules TV movies. They definitely improve as they go on. "Hercules and the Circle of Fire" is a significant step up in quality over "Lost Kingdom", which was in turn a major improvement over "Amazon Women". It was first broadcast on 31 October 1994, and is the third of the five original Hercules: The Legendary Journeys films.

The goddess Hera has stolen the flame of Prometheus, condemning the world to slowly die in an ever-growing, endless winter. It's up to Hercules, paired up with the plucky Deianeira (not the one from "Hercules and the Lost Kingdom", just a completely different woman with exactly the same name - it happens, I guess), to travel to Mount Aepion, retrieve Prometheus' flame and save the world.

Everyone seems a lot more relaxed in "Circle of Fire". The story moves along with a much better pace and, while it's still an episodic adventure in the vein of "Lost Kingdom", it feels better constructed and more warmly scripted. Kevin Sorbo seems to have settled in completely as Hercules - he plays an all-round nice guy with such apparent ease. It's hard to make nice people engaging on screen, but he manages it and then some. I think a lot of the success of the Hercules franchise is due to Sorbo's likeable performance.

This film also gives Anthony Quinn a lot more to do than in the previous two movies. It allows his Zeus to feel a bit more like a character and a bit less like a marketing stunt.

"Circle of Fire" differs from its predecessors in giving Hercules a love interest. Quite why they named her Deianeira one film after featuring an unrelated Deianeira is a mstery. I guess they really liked the name. The part is played by Tawny Kitaen, then best known for appearing in a string of heavy metal music videos. She performs her role in a likeable fashion, matching Kevin Sorbo well and giving this film something extra than the other two lacked.

I'm giving this one a thumbs up: it's still silly fantasy pulp, but it know what it is and it acquits itself very well. That leaves us with two out three worthwhile Hercules TV movies so far - or 67%.
Posted by Grant at 11:25 AM