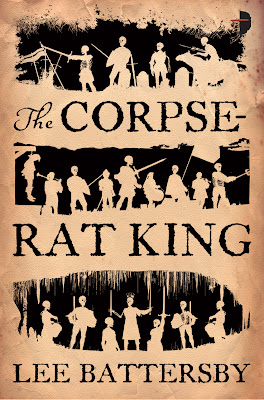 I first encountered Lee Battersby by reading one of short stories. I then met him a few weeks later at a science fiction convention, and I'm very pleased to be able to call him my friend. I'm also in the weird position where I have been his friend for almost exactly as long as I have been a fan of his writing. I've read his short fiction, including his excellent solo collection Through Soft Air, and now I'm immensely happy to be able to read his debut novel, The Corpse-Rat King (available now from Angry Robot).

I'm halfway through the book at the moment, and enjoying it immensely. Lee is exceptionally good at juggling humour and horror - not the "ooh, ahh, vampires and werewolves" kind of horror, the "ah! ah! fetch me the mind soap!" kind - and that talent is boldly on display here. A sequel novel is due early next year, I can't imagine how Lee won't have a long, lucrative career ahead of him. If the nicest thing for a writer is to succeed, the second nicest thing is to see a deserving friend succeed - and succeeding he certainly is. This past weekend I asked Lee five questions.

Your debut novel The Corpse-Rat King has recently been published by Angry Robot Books. I'm struck by its grit: for me fantasy is often a genre of beautiful mountain vistas, rival aristocratic houses and enormous wars. Your book seems to be the opposite of that: the battle seems to be over at the start of the book, half the aristocrats are dead, and the story itself seems caked in mud and shit from the first page. Was this a deliberate attempt to find a different approach to the genre, or were there other inspirations?

"I guess you could say my inspirations are the opposite of what you read in the book - the novel was written in frustration at all those soft-focus phat phantasies that seem to say "Weren't medieval times just so grand and flowery and wasn't it great when we had Kings and nobles to do all our thinking for us so we could get on with the task of being jolly yeomen?". I wanted to write something foul and smelly and with dirt jammed so far under its fingernails that they split. And then my absurdist self snuck into the process while I wasn't looking and kind of subverted that aim too, so I ended up with something partway between all of it."


"From what I've read and seen of history, most of it-- from a lower-class perspective, at least-- was pretty short and brutal, and I've always been highly aware that, in any other time, I'd have been fed to the machines when I was a kid and dead by 35: I'm very much from peasant stock, and it took two world wars for most of us to get enough education to escape: I'm literally only 2 generations from maids who worked 'in the house up the hill'. So I've no time for that backwards-looking pastoral wish fulfilment bullshit. Everybody wants to come from Avalon, when the truth is most of us are descended from the dirt-shaggers of county Slopbucket. And that should be explored and celebrated, too, not hidden and denied, because the working classes have amazing stories, and they tend to get lost amidst all the flag waving. My mother, for example, could swear in Polish before she could speak in English, because she was born during the war into a house where 4 Polish air force pilots were billeted. It's those sort of details that get lost in the 'grand sweep of history'. why the hell do we, as fantasy authors, buy into that, when we're the ones who should be ferreting through the middens so we can poke the official narratives in the chest and say "Ah, actually...". Artists should be guerilla fighters, not patsies for the status quo."

You've now successfully written a novel, and of course you've long been successful at writing acclaimed short stories. How does the technique of writing each form differ? What does one give to you as a writer that the other does not?

"I love short stories, and if I could make a living from them I probably would. I love the immediacy of them, the high-impact use of words and the almost violent nature of the writing process. Novels roll out along a more leisurely path. From a writing point of view they take months - if you write like I do, about 18 months each at the moment - and so it's a daily routine of immersing yourself in a landscape you're intimately familiar with. The skill sets can be the same, but the way you focus is very different. My entire career, right back to my start as a poet and stand up comedian, has been about the search for brevity. Even now, my novels don't crest 110 000 words, which is relatively brief for a fantasist. But what I'm finding is that there is a lot more space for my natural voice to emerge, for my own particular crusty cynicism and absurdist viewpoint to be expressed. I think as my career progresses I'm likely to move away more and more from standard SF/F and further into that cross-form narrative that people like Lethem and Pratchett and Cormac McCarthy seem to inhabit, because the development of an absurdist voice seems to demand that the setting become secondary to the voice itself, and it might be that my "SF voice" might only happen in my shorts. So short stories are the purer writing, but novels seem to contain the purer voice. Go figure."

Aside from your novel, you've received immense acclaim for your Father Muerte stories. What is it about this character that appeals to you?

"For me, it's a chance to incorporate and extrapolate upon all the weird little factoids and hidden histories I absorb over the course of a year or two, and give them a unified explanation. I like working with a character who doesn't have to explain himself to the reader: mysteries can remain mysteries, and it's as close as I can get to saying "Because I said so" directly to my readers, which is high cheek on my part. But I find that I like to write, not just flawed characters, but ones who are almost fatally flawed: I like characters who begin their narrative already teetering on the edge of the abyss, then I like to keep nudging them to see how good their balance is. I like characters whose flaws are in danger of becoming the only quality that the character themselves can see anymore. The Father Muerte novel I've just completed, Father Muerte & The Divine, answers a lot of questions that have cropped up during the short stories, but in doing so really pushes the character over every edge I've given him."

"Reaction to the shorts has always been mixed - for every "I love it" there's an equal and opposite "I don't get it" - very few middle ground responses. I think that's because you've really got to love a bit of mental gymnastics while you read them, and not everybody wants that. They're never going to be just straight narratives. You're always going to feel, I hope, like you're glimpsing the real story out of the corner of your eye while you zoom past on the story I'm telling you. I don't believe literature should be comfort food, and the Muerte stories are probably the most consistent exploration of that belief, at least during the writing process."

Is there a book you've ever read where your immediate response to reading is to point and say, "That: I wish I had written that." (For me it was Chuck Palahniuk's Fight Club.)

"God, hundreds. There are some writers out there who just boggle the living hell out of me. Jonathan Lethem springs to mind, as does Gene Wolfe. Audrey Niffennegger's The Time Traveller's Wife is a frigging
masterpiece, and so is Chuck Palahniuk's Rant, which is just brilliant - so clever, so layered, so multi-faceted I've actually deliberately read the thing backwards and it's still a perfectly realised narrative in that direction as well. Mieville's The Scar, which is a flawed tour de force, but is just so chaotic and self-confident and massively 'fuck you' that it's a tour de force nonetheless. I loved Jeff VanderMeer's Shriek: An Afterword, Kirsten Bishop's The Etched City, Walter Moseley's The Man in My Basement, Moby Dick, Gulliver's Travels, The Three Musketeers, Candide... seriously, how long have you got?"

"There are days I'm paralysed when I sit down to write because I look at my bookshelves and realise just what a small and miserable talent I have compared to what I see. But what can I do? I'm addicted, reader and writer. I just have to try to tell a story as weirdly and disturbingly as I can, and hope I can make up in effect what others have in skill."

If I was to ask you a question that enabled you to plug your current work, what work would you plug?

"Marching Dead, the sequel to The Corpse-Rat King, hits shelves in March 2013. Marius dos Hellespont, begrudging protagonist of the first novel, is drawn into world-ending events that he unwittingly set into motion in the first volume, and spends the novel being beaten, battered, having everything that matters taken from him and managing to lose the rest, until he finds himself cornered between the choice he wants but can't possibly make and the one he wants to avoid most in the entire world but has to accept. It's a cheery, uplifting sort of a book that way. But it does contain psycho-skeleton warrior nuns and sex between consenting dead people, so there's something for everyone."

The Corpse-Rat King is currently available from Angry Robot. A link to buy the physical book from Book Depository is here, and the audio book is here. You can find Lee Battersby's website here.
Posted by Grant at 9:06 AM