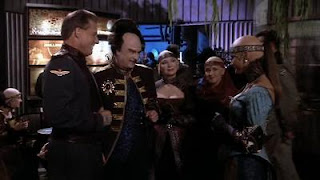 Talia's ex-husband arrives on the station looking to reconcile. Conversely, Londo has chosen to celebrate the 30th anniversary of his ascension day by divorcing two of his three wives.

Oh thank heavens, a half-decent episode of Babylon 5. I was beginning to lose hope: despite my fond memories of the original viewing, Season 2 was shaping up to be an absolute disaster in terms of writing and acting. Thankfully we seem to be on firmer ground here. "Soul Mates", written by comic book legend Peter David, is a wonderful combination of humour and drama with a broad mixture of characters and some wonderful guest performances.

Key among these is Jane Carr as Timov, the least enthused and most positively loathing of Londo's three wives. She plays the part with a wonderfully prissy disdain: of London, of his activities, and of his other two spouses. On the one hand it's a foregone conclusion which of his wives Londo will ultimately choose, but on the other hand I wouldn't have wanted it to be anyone but Timov: ironically, by telling him exactly what she thinks of him (not much), she's the only one who shows him any kind of respect.

Also excellent is Keith Szarabajka (Angel, The Dark Knight) as Matthew Stoner, Talia's untrustworthy and unlikeable ex-husband. Szarabajka does an excellent job of making Stoner as aggressively unpleasant as possible. He pokes and prods, and insults, and manipulates. His secret is well developed and clever, and adds another disturbing element to the series' Psicorps story arc.

Like the best Babylon 5 episodes, "Soul Mates" uses its plotlines to further enhance and develop relationships between its characters. Londo and G'Kar get another round against each other. Garibaldi and Talia get a little closer. Ivanova and Delenn bond over hair styling. This sort of interplay has been sorely missed in recent weeks, and I'm glad to see it back.

With "Soul Mates", Babylon 5 appears to be back on track. Hopefully it will stay in this direction for a while - it was beginning to get tiresome to watch. We're seven episodes into Season 2, and three episodes have been good: a slightly more promising tally of 43%. If the next episode is as enjoyable we'll be up to 50/50.
Posted by Grant at 10:44 AM