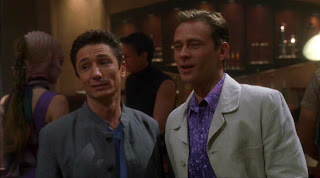 The Enterprise finally reaches Risa, apparently the only pleasure planet in the entire 200 year history of the Star Trek universe, since I'm pretty sure it's the only one we ever see anyone go to. It reared its ugly head in The Next Generation, and popped up again in Deep Space Nine, and now Enterprise demonstrated that even two centuries earlier humans were going to the planet with crass intentions of drinking themselves silly and making amorous advances on the closest bipeds.

The Enterprise crew draw lots on who gets to spend two nights down on Risa, and who has to stay on duty. By an astounding surprise all but two of the regular cast win trips to Risa with only T'Pol and Phlox staying onboard. Travis goes rock climbing. Hoshi goes looking for an opportunity to learn new languages. Archer settles down to read a book and walk his dog. Trip and Reed go looking for sex with alien women.

I am surprised that this episode is as enjoyable as it was, since the last Star Trek episode set on Risa, Deep Space Nine's "Let He Who is Without Sin" is one of the worst Trek episodes of all time. Instead this one is exactly what I was hoping the last episode would be: the crew head down to a planet for a fun holiday trip, and (in part) that's precisely what they do.

Hoshi's attempts to learn new languages lead to a one night stand that is delightfully played without guilt, horrible twists or anything much beyond her simply having a good time. Trip and Reed's attempts to actively go looking for one night stands leads to them tied up half-naked in a cellar somewhere. It's actually quite a nice plot thread that begins slightly ugly and turns the tables on their sleazy behaviour with a robbery. Archer starts off in a dull romance that quickly turns into something much tenser, with a pleasing (and utterly unexpected) connection to a previous episode.

That's pretty much the episode in a nutshell: it starts off looking as if it's going to be dull and slightly tedious, as I had been fearing, and then twists around and becomes a rather delightful surprise. It's a deliberately laconic, fluffy sort of an episode - a palette cleanser before the tension ratchets up in next week's season finale. So that's 15 good episodes out of 24, or 63%, with one more to go.

One final observation: as part of the continuing "let actors direct" policy of Star Trek, "Two Days and Two Nights" was directed by Michael "Worf" Dorn.
Posted by Grant at 9:15 PM