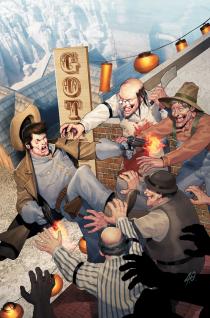 It's been a while since I wrote one of these, so let's dive in and look at one of my favourite books in the New 52, All-Star Western.

The writing team of Justin Gray and Jimmy Palmiotti have been writing the comic book adventures of scarred bounty hunter Jonah Hex for several years now. Their previous book, simply titled Jonah Hex, was a bizarre anomaly at DC Comics. It seemed that no matter how low the sales fell, it remained resolutely in publication. I'm not sure precisely why this was. Perhaps publisher Dan Didio simply really liked the character (this is what saved Blue Beetle for quite a while). Perhaps DC were keeping it in print hoping that the Warner Bros movie adaptation would bump up the readership (and to be fair, sales went up about 18% in the month of the film's release). Maybe it was simply that Gray and Palmiotti could write the hell out of a comic book western (they can, and - in All-Star Western - they do).

All-Star Western improves on Jonah Hex in two respects. Firstly, it relocates Hex from the Wild West to 19th century Gotham City. This pulls the book in nicely to the DC Universe, and provides ample opportunity for loose tie-ins to the Batman books (there have already been appearances by the Court of Owls, and the Wayne and Cobblepot families). Secondly, they give Hex a sidekick in the form of intellectual, effete, pioneering psychologist Amadeus Arkham - who will someday establish Gotham's notorious Arkham Asylum. They make for a great double-act.

To make the comic even more enjoyable, Gray and Palmiotti keep surrounding Hex and Arkham with an array of strong female vigilantes and gunslingers, including Tallulah Black, the Barbary Ghost and Cinnamon. In fact, All-Star Western is packed full of enough engaging, vivid characters that DC easily has enough to spin them out into a whole sub-line of superheroic western comic books. I can dream...

On top of all of that, Moritat's exceptional artwork is icing on the cake. 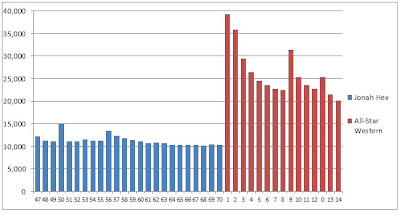 Looking at the sales figures, and All-Star Western demonstrates why the New 52 - for all it's faults and failures - was a good move for DC. It has lifted Jonah Hex up from starring in a comic that was barely breaking even to one that's making a pretty healthy profit. Sales are declining, of course, but then sales of all monthly comic books inevitably do. If All-Star Western can stabilise its sales to about the 20,000 mark, it shouldn't have a problem thriving for the next few years. The two sales bumps you can see in Jonah Hex (blue) are issue #50 and then the release of the Jonah Hex movie. The two sales bumps you can see in All-Star Western (red) are a Batman "Night of the Owls" tie-in and issue #0.
Posted by Grant at 9:36 AM