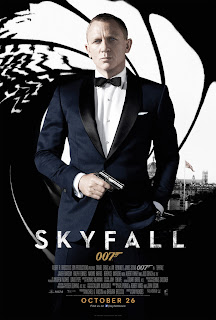 There's no avoiding the fact that this review of Sam Mendes' Skyfall, the 23rd James Bond movie, is going to contain spoilers. Major plot and character developments will be exposed and discussed, so if you haven't seen it yet and plan to, then you might want to skip over this review and come back once you've watched the film.


Skyfall is a maddening film, packed with as many admirable set pieces as it is infested with poor scripting choices. At times it made me want to punch my fist into the air. At times it made me want to punch the filmmakers in the face. Despite the great moments - and we'll discuss those in a second - my ultimate emotional reaction to the film is a mixture of frustration and rage. I feel frustration because the film can't help itself from being quite unpleasantly sexist and - in one specific scene - actively misogynist (in the sense that I wonder if the writers and director hate women). I feel rage because for all the character development and progression in the franchise we saw in Casino Royale and Quantum of Solace, Skyfall exits with a status quo re-established that James Bond hasn't experienced since the mid-1980s. It's a backwards step not seen since Bryan Singer spent $200 million dollars of Warner Bros' money remaking an early 1980s Richard Donner movie in Superman Returns.

The film begins promisingly, with an excellently staged and pacy chase sequence through Istanbul. Daniel Craig slips effortlessly back into the role of James Bond, and in this case he's paired with Eve, a female MI6 agent played by Naomie Harris (28 Days Later, the Pirates of the Carribbean trilogy). It's fantastic to see Bond paired up with another agent, which doesn't happen too often historically, and I really liked Eve's characterisation. The chase reaches a train on a bridge, time is limited and Eve is ordered by M (Judi Dench) to take a risky shot with a high-powered rifle. She misses her target, and hits Bond instead. His body goes plummetting into the river below.

It is an outstanding opening sequence, beautifully shot by cinematographer Roger Deakins, and scores EON Productions a hat trick in terms of opening Daniel Craig's Bond films. I had the fortune of viewing the film in Melbourne's IMAX cinema: Skyfall was shot digitally, but a special IMAX presentation has been supervised by Deakins and director Sam Mendes to give the film a taller aspect ratio (1.9:1 rather than the theatrical 2.35:1). The film looks incredibly good projected in that ratio onto a seven-story screen (Melbourne has the third-largest IMAX screen in the world). 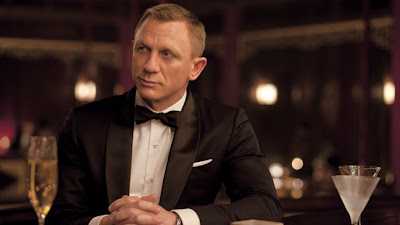 Once the movie starts up again, things get a lot murkier. For one thing, Skyfall is a bizarrely slow-paced movie. For another, it doesn't make an enormous lick of sense. The villain's motivations are strangely small-scale for a Bond flick: no aspirations to take over the world, just a plan to shoot one person. At one point he even engages in a lengthy escape and chase sequence involving derailing an entire London tube train just so he can climb up to a Parliamentary committee and take pot shots at Judi Dench. Surely a smarter move would be to use another bomb, or simply come to London before he's captured and take her out. It's visible from an earlier scene in the film that M doesn't have any police protection outside or within her townhouse. Similarly the film's climax involves Bond driving M all the way from London to Scotland simply to replay the events of Home Alone only with more guns and septegenarians.

The action scenes are exceptionally well handled and wonderfully shot and edited. They just don't make an awful lot of story sense. This wouldn't normally be an issue: this is James Bond, after all. He's fluff, based around silly action and pretty girls. The problem with Skyfall is that it has pretensions towards drama. It wants to have depth. They try this from time to time with James Bond: Casino Royale was a rare case where the added depth actually worked. I'm not sure it works here. It's a superficial faking of depth. It's Shakespeare's "sound and fury". It looks like depth, but signifies nothing.

Then there's the film's disastrous gender politics. Many people are quick to dismiss this: it's James Bond, what do we expect? For one thing, it's 2012. I think we expect our big budget action flicks to at least give women a modicum of respect. Halfway through Skyfall, Bond and villain Raoul Silva (Javier Bardem) play a William Tell game taking pot shots at a whiskey glass balanced on the head of a beaten and distressed woman. Bond overpowers all of Silva's henchmen and captures Silva, but only after Silva's shot the woman dead unchallenged and Bond's made a little quip about it being a waste of scotch. This isn't par for the course for James Bond. This isn't casual sexism. This is actual pure misogyny: a scene of woman-hating bile that makes even this die-hard Ian Fleming apologist stand up and sit in shock with his jaw open. Add in Eve giving up active duty because she's not cut out for fieldwork and M being characterised as weak and sentimental because of motherly tendencies towards Bond, and you've got the most woman-unfriendly James Bond movie ever made. It's even worse than On Her Majesty's Secret Service, and that involved George Lazenby repeatedly slapping Diana Digg in the face.

You can go back and read Ian Fleming's original James Bond novels and you will find they're deeply sexist and overwhelmingly racist. Jump forward to today and the film franchise those books inspired isn't too racist at all. Of course it isn't. That would be unacceptable. So why is it acceptable for Bond to let women get beaten and murdered, and then make a joke about it?

There is one scene in the film that I did absolutely adore, which involved M reading a Tennyson poem while Bond was running down a street in a race to save her. That one scene gave a wonderful argument for the future of Bond, and what the character represents in the 21st century. That's one scene, though. I wanted a little more from a two and a half hour movie.

Earlier in the film, M is warned to "think on your sins". Later in the film she dies, although not for her sins. She dies because M needs to be a middle-aged frowning man (albeit one wonderfully played by Ralph Fiennes). Eve gives up field duty to be a secretary because James Bond needs to have a Miss Moneypenny (and who the fuck in 2012 would call a woman "Miss Moneypenny"?). Q is back, because we need to have a Q.

Casino Royale was a jaw-dropping feature film, filled with iconic action and depth of character. It rebooted James Bond for the 21st century, making him interesting, relevant and entertaining. It vigorously reshaped the franchise into something new. Skyfall reverses everything to such a degree that we end the film with a Bond format not seen since Roger Moore's A View to a Kill. It replaces innovation with formula. It makes Bond safe for the accountants and the unadventurous again. He is, ironically enough, left where Judi Dench's M found him: a sexist, misogynist dinosaur. A relic of the Cold War.

Everything old is new again. Except it's not. Now it's just old.
Posted by Grant at 9:36 AM