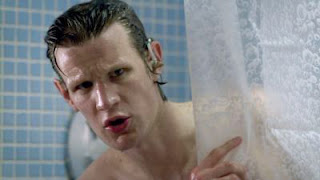 Who50 counts down to the 50th anniversary of Doctor Who by reviewing my favourite episodes and serials over the history of the programme, counting down from #50 to #1. Today, #48: "The Lodger", a 2010 episode written by Gareth Roberts and directed by Catherine Morshead.

"The Lodger" is such an obvious episode of Doctor Who to take that it's jaw-dropping it took the various production teams this long. We've seen the Doctor save the Earth hundreds of times. We've seen him run around famous landmarks, and underground science laboratories, and military installations - yet until "The Lodger" we never got to see him go down to the corner shop for a pint of milk, or hang out in the evening watching TV in the living room.

It's a ridiculous idea, but that's what makes the concept work. There have been plenty of Doctor Who stories about the unearthly or uncanny breaking through into the ordinary world: giant maggots in Wales, cat people riding horses around Perivale, and so on. This is the first time since Doctor Who's very first episode in 1963 that the uncanny element has been the Doctor himself.

Matt Smith has a whale of a time playing out the Doctor's eccentricities as well. For anyone who has lived in shared accommodation before he's immediately recognisable as the most annoying housemate in the world. He's interested in things that shouldn't be interesting, friendly when he should mind his own business, confused by apparently simple tasks and just generally, irritatingly weird.

Part of the reason it all works so well is James Cordon's guest appearance as the Doctor's housemate Craig. He's wonderfully normal, in a way that Doctor Who very rarely is. He's not your typical companion, and it's hard to imagine how he'd successfully function as one. For one fleeting 45 minute episode, he acts as our viewpoint and gives us a perspective we've never previously had: if the Doctor was real, and you personally knew him, he'd actually annoy you to bits.

Gareth Roberts, who first came to the attention of Doctor Who fans via a string of gutbustingly funny tie-in novels, writes a hilarious script here. I've always argued that Who works as well as it does because it's the world's most versatile TV format. This episode is proof, since it's for all intents and purposes Doctor Who as a domestic sitcom. And it works.

It's also a very fan friendly script, filled with lots of little touches and references. How many people noticed, for example, that Matt Smith's Doctor sings the same song in the shower than Jon Pertwee's Doctor did all the way back in "Spearhead from Space"?

If there's one thing that lets "The Lodger" down it's that there is ultimately an evil alien menace to be investigated and dispatched. I did like how the episode leaves a strange plot thread dangling, that gets quietly picked up in "Day of the Moon" a year later. I would have preferred it had Roberts made good on his threat to make this episode's villain the semi-obscure evil cactus monster Meglos, from the Tom Baker serial of the same name, and have the Doctor not remember who he was. The comic potential of that was enormous: