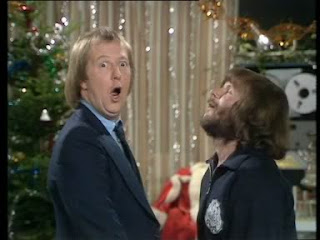 It seems like every time Christmas comes around there's a discussion among my social circles over what the best Christmas-themed movies are, and which ones people are going to watch. Love Actually makes a regular appearance. So does Die Hard. Actual direct Christmassy films like Miracle on 34th Street or It's a Wonderful Life never seem to make anybody's list.

I figured it was high time to give the same rigour to Christmas-themed episodes of television. Thanks to DVD and Blu-ray more TV series and specials are available than ever, and many shows have featured strong, enjoyable or interesting Christmas episodes. Here, in no particular order, are some of my favourites.

The Goodies: "Earthanasia"
The world's leaders have decided that, in response to rising crime, population and pollution, the world will end at midnight Christmas Eve. The Goodies was always a wonderful comedy series, but I think this is a good contender to be one of their best episodes ever. The concept is so remarkably bleak, yet played so lightly, as we watch the last 28 minutes in Tim, Graeme and Bill's lives. It's all confined to their apartment, and is capped with one of the best punch-lines in British comedy history. (Note: not recommended for people with belly button phobias - you know who you are.) 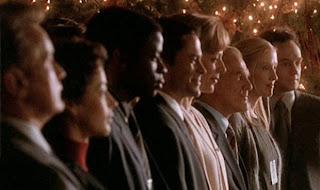 The West Wing: "In Excelsis Deo"
The 10th episode of Aaron Sorkin's dramatic masterwork remains one of its finest hours. In the lead-up to Christmas, White House Director of Communications Toby Ziegler becomes obsessed over the death of a homeless veteran (he died wearing a coat Toby had donated to Goodwill). This is sensitively played and written, uplifting and heartbreaking, funny and sad, all at the same time. The climax - jumping between a funeral and a performance of "The Little Drummer Boy" - is brilliantly directed by Alex Graves. If this one gets you keen, also check out Season 2's "Noel", which is the best TV representation of post-traumatic stress ever made. 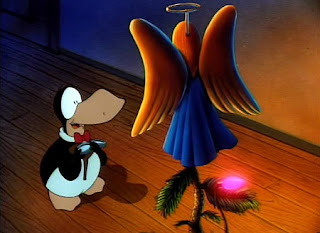 A Wish for Wings That Work
A half-hour animated special by Steven Spielberg's Amblin Entertainment, adapting Berkeley Breathed's children's book - in turn based on his own Outland comic strip. It follows Opus the Penguin as he tries to build himself a set of wings to fly with - only to rescue Santa from the lake instead. This is just a very sweet, beautifully animated half-hour of television that is sorely under-seen and unknown by many TV viewers and animation enthusiasts.

New Girl: "The 23rd"
The most recent show on this list, but possibly my favourite new TV series for 2012 so I think that's fine. At a workplace Christmas party, one couple breaks up and another gets ever closer to getting together. I honestly think this is an exceptional series, combining comedic and dramatic moments with a lightness of touch and a genuinely warm tone. The hallmark of a great TV show is here: there isn't a single character in the regular cast that I don't like. 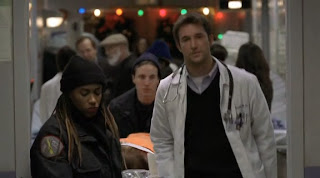 ER: "The Greatest of Gifts"
Anyone sick of Christmas cheer and in need of some miserable realism in their lives should watch pretty much any Christmas episode of ER. They did one a year for 15 seasons, but for now let's pick "The Greatest of Gifts" from Season 7. One character gives birth, and tearfully decides to give her baby up for adoption. Another struggles with a prescription drug addiction. Yet another comes to realism she may be a lesbian. Yet another is in New York seeking treatment for a inoperable tumour. A patient needs to be hidden from street gangs. Fun times every December in the County General ER.

Doctor Who: "A Christmas Carol"
Steven Moffat does wonderfully clever "timey-wimey" things to Charles Dickens. He also manages to squeeze in flying sharks, crashing spaceships and a great central performance by Michael Gambon. This is my favourite of the now-annual Doctor Who Christmas specials, although I also have a lot of affection for "The Christmas Invasion", which is the best post-regeneration episode I think the series has ever done. The masochistic may wish to check out the awful spin-off K9 and Company, which is set at Christmas time and pits a 51st century robot dog against a 20th century cult of devil worshippers. As you do.

Porridge: "No Way Out"
Fletcher's plans to spend Christmas relaxing in the infirmary are thrown into doubt when he discovers a break-out attempt is in the planning. I adore this 1970s BBC comedy which, while white-washing actual prison life for a prime-time audience, managed to push the envelope a hell of a lot at the same time. Ronnie Barker was rarely better than he was in this series. If you enjoy this, there was a second Christmas special the following year.
Posted by Grant at 8:19 AM