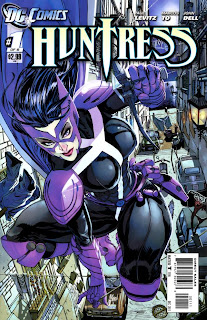 While the New 52 relaunch breathed new life into DC's monthly superhero comics, the same can't really be said for their miniseries: short-run books of between four and twelve issues each. There have been ten miniseries released since September 2011; we're going to take a look at the first five of them here.

Huntress
Let's kick of with Huntress, a six-issue miniseries written by Paul Levitz that reintroduced the popular Batman character of Helena Bertinelli - or is she? A clever last-minute reveal is already old news to readers of Worlds' Finest, which launched after this series concluded, but it was quite a clever trick holding things back at the time.

This is a really solid, entertaining book of international intrigue and crime-fighting with a strong script, nice art and (thank goodness) Huntress in a sensible costume. You'd be amazed how rarely that happens. She's a great character, and I don't think she's ever had a strong miniseries as this one. It's available now in trade paperback if you want to check it out. 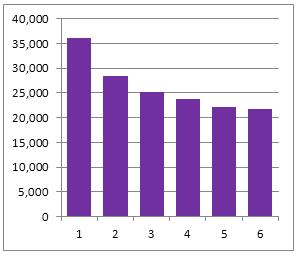 This is a miniseries that also sold reasonably well. It launched in October 2011, one month after the New 52 hit, and sold just north of 36,000 copies of its first issue. Had it launched a month earlier, sales like this would have outsold five of the New 52 monthlies - that's pretty impressive for a book that had a much smaller marketing push behind it. Issue 2 saw a 21% drop in sales, which is pretty harsh, but the problem with the miniseries format is that readers unsure whether they like the book or not don't have an option to "wait and see if the book improves". By the time they wait, the book is over. The readership attrition was much less severe over the remaining four issues. Issue 6 sold over 21,600 copies: that's higher than the sixth issue of 20 different New 52 monthlies. I think we can say Huntress did okay, and certainly her monthly title Worlds' Finest is selling very well indeed.

Penguin: Pain and Prejudice
This five-issue miniseries also launched in October 2011. The Penguin is a much harder sell, I think. He's a villain, and not an outrageously popular one. He hangs around because writers can use him and he's a very old and well-known character. That aside, is he actually that interesting? Was there a massive pent-up demand for a Penguin book? Probably not. 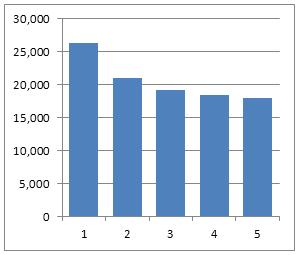 I grabbed the first issue last year as an impulse buy, not really expecting to be wowed but curious enough to give it a chance. It turned out to be a really well-crafted, twisted little book. There's nothing in it that couldn't have been told in one of the numerous Bat-books DC publish each month, but it was a solid read and gave a new perspective on the character. I came out a much bigger fan of the Penguin than I was going in. Like Huntress, this book is available as a trade paperback and is well worth the money.

The first issue sold 26,000 copies or so, which I personally find quite impressive given the character. With Issue 2 sales dropped to just over 21,000 - that's a 19% fall, slightly less severe than Huntress but then again Penguin didn't have as far to fall. The book lost about 500-600 readers with each subsequent issue. Issue 5 sold just under 18,000 copies, which is cause for concern but not too scary for DC: 20,000 and above is reasonably safe, under 15,000 is alarm bell time. In between is the B-list where much of the New 52 seems to reside.

Legion: Secret Origin
DC obviously went into the New 52 confident of Legion of Superheroes' chances. Not only was there a reboot of that lead title, but a spinoff in the shape of Legion Lost and this six-issue miniseries telling the backstory of the New Legion. What I never understood about this miniseries (written, like the monthly book, by Paul Levitz) was why it was a separate miniseries and not the first six issues of Legion proper. It's a fairly enjoyable book in its own right, also available in paperback, but to be honest it's fairly unnecessary: if you want to try the Legion out, just dive into their first trade paperback and see what you think of it. 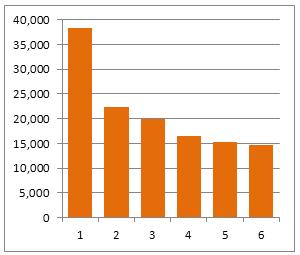 The sales demonstrate why DC was being needlessly optimistic about the popularity of the Legion. Interest in the first issue was pretty high: more than 38,000 copies, outselling both Huntress and Penguin. Sales for Issue 2 were considerably less. 41% of the readership abandoned the book, leaving sales down at about 22,400. Issue 6 sold less than 15,000 copies - down into that danger zone from which no monthly book ever returns (unless Jonah Hex is in it, of course).

By Issue 6 of Legion: Secret Origin (March 2013), sales on the monthly Legion of Superheroes had declined 57% from 45,000 at launch to about 19,700 at Issue 7. Sales on Legion Lost were down to 17,000. I think there's a dedicated (actually, quite frighteningly dedicated) fanbase for the Legion which hovers at around the 18,000-25,000 mark depending on the quality of the book at the time. That's not an enormous readership really, and not one you want to risk spreading too thinly.

The Shade
James Robinson's 12-issue maxiseries The Shade doesn't feel like a New 52 book. I have no idea whether or not this is true, but it feels like something that was commissioned quite a few years ago. It is a sequel to his excellent long-running series Starman, and as such was probably always going to be a bit of a niche series. Quite why DC decided to publish the book as a 12 issue series - rather than, say, a six issue one - is beyond me.

I did really enjoy this comic, but then I was the target market. It has a few off issues, including (strangely) the revelatory final instalment, but overall it was another year in the enjoyable world that Robinson had created back in Starman. It will almost certainly work better as a thick trade paperback when republished.

As for the sales? Well there was a predictably sharp drop after the first issue as readers worked out the book either did or didn't speak to them, and beyond that it's a slow case of reader fatigue. The numbers bottomed out around the 14,000 mark: not good, but not the worst DC has seen. I think this one in particular is a case where the dividends will come in book sales down the road. 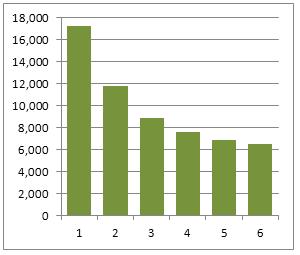 My Greatest Adventure
I haven't actually read My Greatest Adventure. I don't even know what it was about. I'm going to hazard a guess that you don't know either, because only 17,000 people read its first issue and of those less than 6,500 were around for the last. I mentioned the danger zone of 15,000 earlier on: My Greatest Adventure dropped below that in its second issue, losing more than 30% of what few readers it had in the process.

Issue 3 dropped right out of the danger zone and into the dead zone: less than 10,000 copies sold. By Issue 6 it was down to under 6,500: the lowest selling single issue of the New 52.