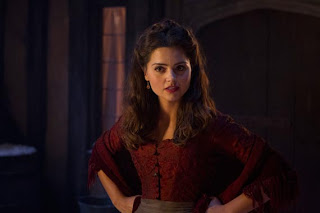 It's been a few months, but Doctor Who is back for its now-traditional Christmas episode, before the final eight episodes of Season 7 take us into the 50th anniversary year. Matt Smith is back as the Doctor, along with new companion Clara Oswald - sort of - who was introduced earlier this year - sort of. It's all rather confusing. Timey wimey, et cetera.

It's Christmas Eve in Victorian era London, and a mysterious snow has started fall in the streets. It seems to have something to do with the dour Doctor Simeon (Richard E. Grant). The veiled detective Madame Vastra and her wife Jenny are investigating, as is part-time governess Clara Oswald. Then there's the Doctor, but he's given up investigating things and doesn't save the world any more.

Short version first: "The Snowmen" is a much better Christmas special than last year's rather throwaway attempt, but is still a fairly flawed episode. It's got plenty of good bits - certainly enough to make it an enjoyable crowd-pleaser - but also a lot of annoying elements that have a tendency to get in the way. The end result is an episode that's good, but a frustrating kind of good, where it's visibly apparently what needed to be done to actually make it great.

The episode's antagonist is great, with wonderfully scary fanged snowmen and a frightening governess made of ice that quotes Punch'n'Judy. Richard E. Grant does a nice job being mean-spirited and threatening, without actually doing a great deal. It's almost a shame, because he's such a good actor. I rather hoped they'd give him a slightly meatier part. He is subservient, however, to a mysterious ice-based "Intelligence" voiced by Ian McKellen, whose voice gives the character an amazing amount of power and gravitas. I also really liked how subtly they left the Intelligence to be its own thing for new series viewers, while teasing older fans with the fact that we've just watched the origin story for the Great Intelligence from "The Abominable Snowmen" and "The Web of Fear". Now that the Intelligence is back in the series, I do wonder if the Yeti are going to be far behind.

Supporting the Doctor are Madame Vashtra and her wife Jenny, the sword-wielding detectives last seen in Season 6's "A Good Man Goes to War". It's nice to see them back. It's particularly nice to see Strax the Sontaran back. I secretly hoped he was going to be the Doctor's new companion - certainly he gets all of the best lines.

Instead for a companion we get Clare Oswin Oswald, who's now mysterious died twice with a third present-day version cropping up in the episode's final moments. It creates a nice mystery for the eight episodes to come in 2013. Sadly Clara herself is a relatively annoying character. She's not as tediously preppy, perky and flirty as she was in "Asylum of the Daleks", where (just checking back on that post now) I described her as "a walking cliche, the overly clever "manic pixie girl" who can't hold a conversation without flirting, drops it lines about experimenting with bisexuality, and who lounges around in a tight red minidress delivering not so much dialogue as an unending series of quips and one-liners". Sadly she's still pretty close. She starts the episode a lot more reined in and enjoyable, but she gets more and more annoying as the episode progresses. For now I'm on the fence: once the proper modern-day version is in the TARDIS she might be a lot more enjoyable. On the other hand she could be Doctor Who's worst companion since Tegan "Rabbits" Jovanka. Time will tell.

New opening titles and music, which I adore. New TARDIS console room, which I'm not quite as in love with, but it may grow on me.

All in all, it's a good but flawed episode. Too much time gets spent on emotional baggage and not enough on running down corridors and telling an actual story. This is a perennial problem of post-2005 Doctor Who, and "The Snowmen" is sadly one of the worst offenders in recent seasons.

Six episodes into the season, six good episodes in total - so I can hardly complain too much can I?
Posted by Grant at 1:25 PM