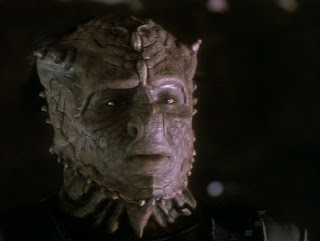 Sisko takes Jake and Nog on a field trip to the Gamma Quadrant, along with Quark - who's weaseled his way onboard in an attempt to persuade Sisko to approve his latest money-making scheme. When Sisko and Quark are captured, they find themselves in the custody of the Jem'Hadar - the mysterious reptilian servants of the Dominion.

"The Jem'Hadar" is a very clever season finale, one that begins with an innocuous camping trip on a forest planet and ends with the Federation on the brink of a galactic war. It ramps up the threat in stages, carefully building scene by scene to a worrying, troubled and distinctly open-ended conclusion. Throughout the season there have been references to the Dominion, the unseen overlords of the Gamma Quadrant. Now we come face to face with their shock troops, and it's a worrying sight.

The threat comes in stages. First they're sneaking up and capturing Sisko and Quark. Next we see them beaming into the operations deck of Deep Space Nine and, in one of the series' most disturbing moments, calmly walk through the restraining shields as if they simply aren't there. Finally, in the episode's one major action sequence, we see a Jem'Hadar fighter take out an entire Galaxy class starship in a kamikaze run. Sisko claims the message is clear: these are the lengths the Dominion will go to in order to defend their territory. For the viewer, however, there's another message: these guys are serious business. If the Enterprise was here, Picard and his buddies would all be dead now.

This is effectively the episode that dictates the rest of Deep Space Nine. The Federation has encountered a civilization vastly superior in firepower and technology, and unlike the Borg (for example) they can't be quickly removed or defeated via a deus ex machina. (Actually it's intriguing that, out of all post-Next Generation series in the franchise, DS9 is the only one in which the Borg don't make at least one appearance.) This was always a dark show; now it's a dark show headed towards a galactic war.

I like Deep Space Nine's season finales more than those of other Star Trek series, because they don't go for the out-and-out cliffhanger. They leave a lot hanging for the next year, but they always make sure the finale itself has a definite conclusion at the end of 42 minutes. This episode also impressed me because it found time among the action and threats to develop character as well. Sisko and Quark leave this episode a little closer and more respectful than they entered it.

I will post a season summary soon, so for now I'll simply observe that "The Jem'Hadar" closes Season 2 on a high, with 20 worthwhile episodes out of 26. That's a frankly stunning batting average of 77%.
Posted by Grant at 1:07 AM