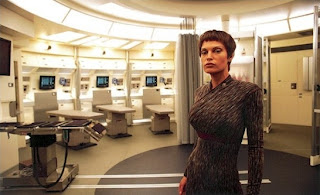 The first time around I hated Enterprise. I didn't last the entire pilot episode, and only sampled parts of one or two episodes afterwards. I never really watched it again. I did sit through an entire episode of the fourth season, but didn't really know the characters so wasn't able to get a good idea of what was going on. Part of the problem was that so many elements of the series seemed constructed to annoy: the legendarily crap opening theme song taken from Patch Adams, the fact that it was a prequel, the way it was apparently rewriting the history of Star Trek willy-nilly, the tired old time travel story arc, and so on.

In retrospect, Enterprise's worst enemy was that it premiered straight after Star Trek: Voyager had wrapped up. Before that Star Trek: Deep Space Nine and before that Star Trek: The Next Generation. The pilot episode of Enterprise was the 527th episode of Star Trek in less than fourteen years. Familiarity had bred contempt, and all the changes in time period, sets and technologies couldn't mask the fact that Enterprise was still yet more Star Trek from the same production team, now heading into their 22nd season since 1987.

So I think the series feels a lot more enjoyable in 2012 because I haven't regularly watched new episodes of Star Trek in more than a decade. I'm enjoying seeing the old storylines and tropes rehashed, and appreciating the talent involved in making yet another distinct set of variations on the same old themes.

Across the 25 episodes of Season 1, the characters actually develop and change. They bond with and befriend one another. They're probably the warmest and most likeable set of regular characters Star Trek ever had. Characters that used to irritate me I now find actively enjoyable to watch. Scott Bakula's Captain Archer for one is sorely underrated by Star Trek fans at large.

Some episodes weren't as good as others, and the odd annoying quirk or cliche cropped up from time to time, but all in all I have fallen completely in love with Enterprise. This is one series I think will become more loved and appreciated well after its time, as one fan after another impulsively goes back to give the thing a second chance. I've even warmed to that bloody theme tune.

As a quick shortcut (in case you're considering viewing some of it yourself), I think the five best episodes of the season (in chronological order) were probably:


On the other hand, the five episodes I'd really suggest avoiding are:
Posted by Grant at 11:58 PM