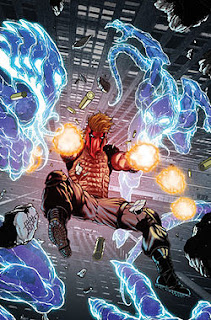 I already had a look at how the sales of Grifter had been going back in August, and predicted back then that there was nowhere for this book to go but cancellation. Since then the book has indeed been cancelled; January's Grifter #16 will be the final issue.

I wanted to take a second look at this book because, thanks to my ridiculously well-stocked local library, I have now had the chance to read the first trade paperback collection of Grifter and can actually review the comic this time around - last time I simply expressed my disinterest and looked at the sales.

It turns out that Grifter started quite promisingly: an action-packed first issue with a non-linear narrative and some wonderfully scripted and laid-out fights and chases. Nathan Edmondson sets up a pretty great premise here: there's an alien invasion of Earth and the only person who can see them is one former Special Forces soldier turned con artist named Cash Cole. Cafu's artwork is very good as well.

Then the book begins to slide into mediocrity, issue by issue, and I think you can clearly see the readership's reaction to that slide in the sales. 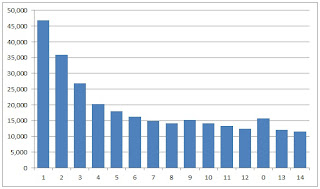 Issue 1 sold almost 47,000 copies (including a second printing), whereas issue 2 only sold 36,000. Then we drop down to below 27,000, and then just over 20,000, and then by the end of Nathan Edmondson's eight-issue run we're down to the low teens. Cafu has moved on by issue 4, and his replacement Scott Clark is nowhere near as good an artist. Then there's a confusing one-issue crossover with Green Arrow, followed by an equally confusing one-issue crossover with Stormwatch. After that DC take their chances on a Rob Liefeld takeover: you can see the minor bump in sales his arrival makes with issue 9.

There's another bump for issue 0 in September 2012, but as with almost all of the New 52 that bump was only temporary and didn't actually affect month-to-month sales for the book. With two issues to go, Grifter will be lucky to stay above 10,000 units.

When I first discussed Grifter I wrote " what I've seen has absolutely not piqued my interest in the slightest". Now that I've sampled eight issues, I can see why DC took a chance on this book. It's just a shame that, the first three issues aside, it simply wasn't worth them publishing it.
Posted by Grant at 7:22 AM