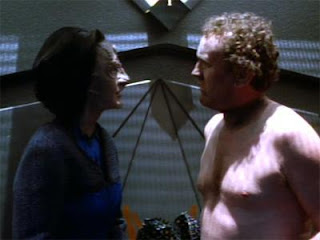 Miles and Keiko O'Brien head off on a long-awaiting vacation - only to be stopped in deep space by a Cardassian patrol. While Miles is arrested and taken to Cardassia Prime for trial, Keiko and the Deep Space Nine crew work against the clock to prove O'Brien's innocence.

What started as an offhand reference in "The Maquis, part 2" is blown out into an entire episode, as Cardassia's cheerfully Orwellian justice system is explored in-depth. The accused is found guilty at the same time they are charged - their trial exists to demonstrate their guilt, show the public that all crime is severely punished, and allow the criminal's family to disown them in public to avoid any shame on their own part. The accused is never told what they have been charged with - as it is widely known that only the guilty are charged the accused by definition already knows what he or she did. The trial is televised planet-wide so all can see the sentence carried out and boost public morale.

It's ridiculous, but knowingly so. There's an element of satire at work here that is marvellously constructed and fits perfectly into what we've seen of the Cardassians in the past. We also get our first look at a Cardassian woman, unless I'm forgetting an earlier appearance: Star Trek has a weird habit of hiding women from its more famous species (Klingons, Ferengi, Romulans, the Borg, et al). Actually speaking of Cardassians, this is the first episode set on their home planet.


If there's a significant criticism to be made of "Tribunal", it's that the exaggerated and satirical tone of the Cardassian courtroom doesn't mesh remotely with the rest of the episode. In fact, the Cardassian scenes are so entertaining that scenes on the station appear artless and dull by comparison.

Fritz Weaver is fantastic as Kovat, the Cardassian defence attorney who has cheerfully never won a single case. Weaver is one of those career veterans of Hollywood: he's played supporting characters in film and telvision for decades, including episodes of The Twilight Zone, The Fugitive, Mission: Impossible, Law & Order, The X Files and Frasier. Nash Bridges co-star Caroline Lagerfelt plays the judge Makbar - she's wonderfully benevolent and charming while she's condemning O'Brien to death. Richard Poe is back as Gul Evek, which pleases me.

This episode was directed by Avery Brooks, aka Commander Sisko. It was part of the tradition in the Berman era (The Next Generation through to Enterprise) that the cast would get the opportunity to direct the odd episode. Brooks will direct another eight episodes of Deep Space Nine, including at least one per season until the series' end.

Not perfect, but very enjoyable: this makes 19 good episodes out of 25. We've got one episode to go, and the season as a whole is scoring 76%.
Posted by Grant at 9:41 AM