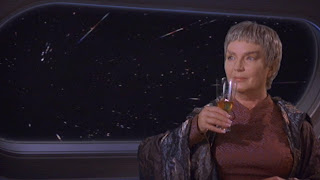 With the crew having run 10 months without a break, Archer agrees to a long-deserved spot of shore leave on the holiday planet Risa. Before the Enterprise can get there, however, it is redirected by Admiral Forrest to the planet Mazar - where it must pick up a disgraced Vulcan ambassador and deliver her to a distant Vulcan cruiser. T'Pol is conflicted, as Ambassador V'Lar was a major influence on her life. V'Lar is not telling the Captain or T'Pol everything she knows, however, and soon the Enterprise comes under attack from pursuing Mazar ships.

Oh Lord, bloody Risa. The holiday planet that graced its tedious presence in The Next Generation and Deep Space Nine rears its ugly, bikini-clad head once again in Enterprise. Thankfully the ship doesn't get there because of their sudden rescue mission. Fingers crossed they don't remember where they were going next week and we can avoid the bloody place.


The problem with "Fallen Hero" is that it's simply not very interesting. The Enterprise plays host to a Vulcan who is surprisingly warm and friendly, which is a concept the series played with earlier in the season. They get pursued by some Mazar ships, but we only ever see the leader on the viewscreen or onboard the Enterprise. It's a bottle show, saving money for more outlandish episodes by restricting the episode to existing Enterprise sets and only two guest stars.

Fionnula Flanagan plays Ambassador V'Lar in a pleasant but ultimately uninteresting fashion. This is the episode's biggest problem: it just doesn't hold the attention. By the end I was half-watching the thing, one eye on the TV and the other on my laptop.

One thing the episode does do well is further develop the friendship between Archer and T'Pol. It's been a gradual and believable shift over the course of the season, and I like that an awful lot. It's just a pity the episode around them is just so bloody ordinary.

I can't recommend this episode. It's not bad, but it's entirely missable. I can't imagine ever bothering to watch it again. So that's a thumbs-down this week: with 22 episodes down, Enterprise has had 13 good episodes. The overall season score just slipped back down to 59%.
Posted by Grant at 12:06 PM