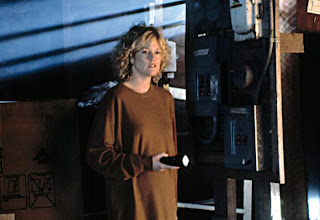 An unmarried couple (Melanie Griffith and Matthew Modine) purchase a pricey San Francisco townhouse, with the aim of subsidizing their mortgage by renting out their ground floor. At first it seems like they've found their dream tenant in Carter Hayes (Michael Keaton): wealthy, generous and upstanding. Once Hayes has moved in, however, the truth is uncovered and the manipulative tenant sets about making their lives a living hell.

Pacific Heights is a 1990 thriller directed by John Schlesinger (Midnight Cowboy). It's not going to win any awards for originality, and it doesn't specifically excel in any particular area. It is, however, a broadly entertaining domestic thriller with a nice slow burn and some great performances.

The film was Michael Keaton's first since Batman, and it seems he deliberately chose as different a role from Bruce Wayne as he could find. Carter Hayes is manipulative, devious and fairly vile, and makes wonderful use of Keaton's intense, slightly frightening eyes. I'm surely not the only person who thinks Michael Keaton has frightening eyes. Played right and shot well, and he has the cold steely gaze of a killer. It worked for him as Batman, and it absolutely works for him here.

Matthew Modine does a good job as landlord Drake Goodman, in out of his depth and driving blindly into Hayes' vicious con. Melanie Griffith plays Goodman's girlfriend Patty. I'm never been an enormous fan of Griffith's acting, or her breathy Marilyn Monroe-style delivery. She's competent here, but I found myself secretly wishing the part had been played by someone with a little more strength to their performance. What I do like is that the script gives so much agency to Patty: while Drake runs around like a bull in a china shop, it's Patty who does the crucial investigating, and manages to start turning the tables on Hayes.

In some respects the film's ending lets it down, eschewing the clever slow burn of the bulk of the film in favour of a stereotypical life-or-death showdown. It's a pity, because it's the slow, relentless machinations of Hayes' scheme that makes the bulk of the movie so enjoyable. (2/5)
Posted by Grant at 9:05 PM