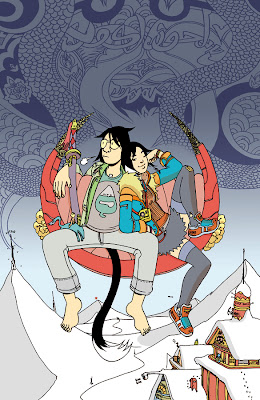 Comic book creator Brandon Graham has been gathering a lot of attention in the past 12 months, thanks to his critically acclaimed relaunch of the Rob Liefeld comic book Prophet. He's a master of surreal fantasy and science fiction, and can push it in both dramatic and comedic directions with equally impressive results. He also wrote and drew the acclaimed comic series King City, and is currently producing the wonderfully strange Multiple Warheads: Alphabet to Infinity (also through Image Comics).

I am an enormous fan of his work, and am absolutely delighted to welcome his as my first recipient of this blog's Five Questions.


1. Why comics? What drew you to the medium and not fine art, film or something else?

"I grew up liking comics more than anything, both my parents and my older brother read them. Comics were the most exciting thing I had around me as a kid and as I got older I got more and more into the possibilities comics allow and how untapped the medium is. Also just how much fun it is to work in.

It's really exciting, especially when I'm doing everything myself, there's so many options on what to focus on, it can be lettering one day and then architecture or dialog the next and then how those things work together to tell a story."

2. Were I to guess your influences I'd start naming quite a few French writer/artists, but who would you name?

"Man, there's a lot of good stuff that gets me excited to work. Moebius is a big one, and Shirow, especially his Appleseed books, Vaugn Bode, Matt Howarth's work in the 80's, Fil Barlow's Zooniverse,
Enki Bilal, Milo Manara, Jose Luis Garcia Lopez (His Cinder and Ashe), Paul Pope's work in the 90's, Munoz and Sampayo and Akira Toriyama's early Dragon ball and Dr Slump." 3. Your relaunch of Rob Liefeld's Prophet was one of the most unexpected and startling shifts in style and tone I've ever seen. How on Earth did this project come about?

"Mostly it just happened because I was hanging out with the Image guys after they published my King city book. I was joking around at a bar with Joe Keatinge and Eric Stephenson about what I would do with Prophet. I said I'd have it be just Conan in space and Eric said --'ok do it'. I almost turned it down at first because I don't have any interest in doing super heroes and the idea of writing for other people never occurred to me, but Stephenson was really open to me doing whatever I wanted with it.

The level of freedom I've had to play around on the book has been insane. Stephenson and Liefeld have been nothing but supportive and I'm thrilled to be working with the other guys on the book, Simon Roy, Giannis Milonogiannis, Farel Dalrymple, and Joseph Bergin and Ed Brisson, and I get to get whoever I can talk into it for back up comics each issue."


4. Of course on Multiple Warheads you're both writer and artist. How does the process differ from when you're only scripting the book?

"It's more of what I'm used to and it allows for much more thought on each page on my part and much more playing around. I tend to think of writing for other people as a fun experiment but not my main thing but who knows, I might end up always doing it as I draw my own books."


5. If I was to ask you a question that enabled you to plug your current work, what work would you plug?

"Warheads and I've got an art/sketchbook book called Walrus that I'm working on too."

You can follow Brandon at his own blog here. Prophet and Multiple Warheads are published by Image Comics, and you can check their website out here. The next issue of Multiple Warheads is due out on 19 December. If you're interested in checking out some of his work, I recommend you have a look at Prophet or King City. Ask for it at your local comics shop or decent independent bookstore. Brandon's art book Walrus is due in 2013 from PictureBox Inc. There's some more information about that book here.

Thank you to Brandon Graham for agreeing to play Five Questions.
Posted by Grant at 8:01 PM