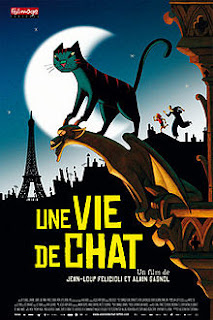 A Cat in Paris is a heart-warming delight. It's the sort of animated film that families should see, and treasure, because it is warmly written and beautifully animated. It's also the sort of animated film that families (at least here in Australia) probably won't see, because the film is French. The DVD has both French and English dubs, but most video libraries seem to stock it - if they do at all - in their foreign film section, where no English-speaking child or family tends to go.

The film follows the misadventures of a domestic cat in present-day Paris. By day the cat is the pet of Zoe, a young girl traumatised into silence by her father's murder. When the sun goes down the cat sneaks off to hang out with Nico, a daring cat burglar who dances across the roofs of Paris each night in search of his next big score.


It is a film overflowing with hand-crafted artistry. It sounds like a tedious cliche to moan about how 'they just don't make films like this any more', but the truth is that they don't - not often anyway, and certainly very rarely in English-speaking markets like the USA or the United Kingdom. It was a tremendous surprise for all concerned when AMPAS members nominated it for Best Animated Feature at the 2011 Oscars - a nomination it richly deserved.

I should also take the time to praise the film's wonderful score by Serge Besset. Part old-fashioned Hollywood thriller, part jaunty jazz riffs, it supports the animation throughout and enhances the experience perfectly.

It's a great family film, and I stress family and not children's. Some scary things happen in A Cat in Paris, with our young protagonist often placed in genuine peril at the hands of some criminals and unsavoury types. Overall it's perfectly safe for kids, but now and then it may be too scary for parents, so the whole family needs to be there in case someone needs their hand held. Opinions differ on the English language dub - I don't mind it, but then I have a pretty high tolerance for dubbing. Your mileage may vary. If everyone watching can read subtitles, the French version is available on the same disc.
Posted by Grant at 10:17 PM