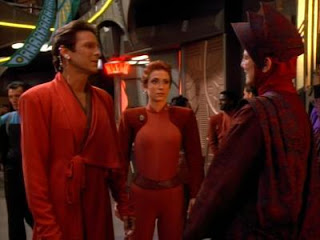 The election of the next Bajoran Kai draws near, with Vedek Bariel and Vedek Winn neck and neck in the race to lead the planet's religious affairs - but when a known Occupation-era collaborator arrives on the station with information implicating Bariel in a notorious massacre, all bets are off.

How many science fiction dramas would spend an entire episode dedicated to the internal politics of an alien culture's predominant church? Of those, how many would manage to make the episode interesting? I'm pretty sure the answer to those two questions is 'one': Star Trek: Deep Space Nine, the first SF drama bold enough to tackle the issue of religion head on in a sensitive and intelligent fashion. Sure, other shows have tackled it since - Battlestar Galactica is an obvious choice - but generally they're written by people who had previously written for Deep Space Nine.

"The Collaborator" continues to use Bajor as a loose metaphor for Israel, in this case exploring the lives and guilt of those who - rather than join the resistance - actively assisted the Cardassian occupation in return for better living conditions and safety. It's an issue that Major Kira takes to heart, which places her in a torturous position when it appears that Bariel - her boyfriend - may be one of the traitors she so earnestly despises.

Louise Fletcher is back as Vedek (and, by episode's end, Kai) Winn. She's fabulous in the role, playing the spiritual leader with such a marvelous blend of arrogance and feigned, simpering politeness. It's somewhat inevitable that she would succeed the late Opaka as Kai - there's simply too much drama possible for the position to go to anyone else.

Certainly it's best not going to Vedek Bariel: once again Philip Anglim gives an odd, wooden performance that makes it a little difficult for me to care about his character too much. It's a shame, because the script gives him a lot to work with here. Thankfully the script also gives a lot to Kira, and Nana Visitor acts her socks off for the second episode in a row.

A few choice scenes go to Avery Brooks: Commander Sisko sits in an uncomfortable position where he's (as far as we can make out) an athiest who's also a leading religious figure among the Bajorans. He sensibly chooses not to take sides, no matter how much he'd like Winn to lose.

This is a great dramatic episode, and a nice contrast to "Crossover". There have now been 18 good episodes out of 24: that's a stunning 75% for the season as a whole.
Posted by Grant at 7:53 PM