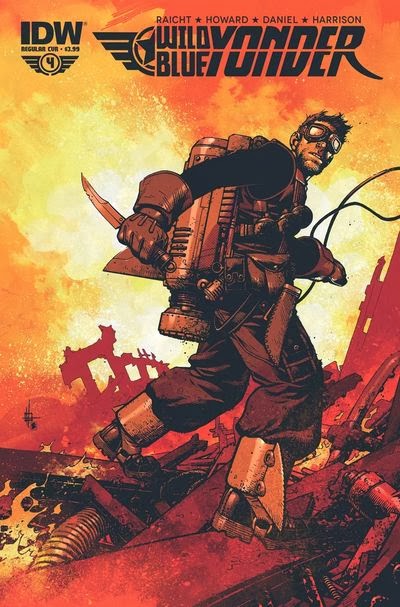 Wild Blue Yonder has had a fairly erratic schedule, as its artists have slipped behind their deadlines and struggled to get the book out. Sadly this has robbed the book of a lot of its momentum - not to mention irritating the Kickstarter donors whose funds enabled the book's production in the first place.

I think there's a lesson here: make sure you don't bite off more than you can chew. As a serialised medium, comic books rely on a regular schedule to retain their audience. Readers don't like unpleasant surprises, another one of which may include this book's quiet extension from five issues to six. While I'm not necessarily averse to getting another issue of the series - I've been really enjoying it - it does make me wonder how carefully Mike Raicht and Austin Harrison plotted their story in the first place.

If the release schedule is costing the book sales that's a genuine shame, because Wild Blue Yonder has been a great miniseries. It's a pastiche, certainly, and pulls on a lot of other source texts, but it's also a thrilling adventure book with great characters and well-crafted artwork. I have no idea when the next issue is due for release, but I'm happy to wait. It's a great comic with a lot of promise, and I hope they give it a better scheduled sequel series in the future. (4/5)

Greg Pak really gets Superman: this first story arc has been a fabulous example of strong characterisation and top-notch action, and it's building up to a great climax. It's nice to see a likeable, uncomplicated Superman for a change, and Lana Lang is a great asset to the book as well. Kuder and Dougherty's art is engaging and fun to look at as well. All up, a wonderful Superman title - something of which DC's been in short supply for some time. (4/5)

Weirdly this book has suddenly become rather good. It's taken months of mucking about, but Gray and Palmiotti seem to have finally hit on a point of difference for Batwing. That point used to be easy: he's in Africa, rather than Gotham City. When they introduced Luke Fox that became impossible, so after much meandering through underwhelming story arcs they seem to have hit on this: Luke Fox is the more reckless and extreme Bruce Wayne. He hurts criminals more badly, and his judgement is a little off. That's better than nothing, and it's amazing what a difference it's made to the actual comic. (3/5)

"Gothtopia" winds up here, and to be honest I'm kind of relieved. It was an average storyline weirdly upped to crossover status with a handful of odd one-issue tie-ins that really didn't add anything to the overall story. I suspect they only existed to pump up the page count of the inevitable trade paperback. It's a shame: this is Layman's swansong as Detective Comics writer, and he's going out on a bit of a damp squib. Lopresti and Thibert's artwork is solid. (2/5)

Time is rapidly running out for Geoff Johns to come to a conclusion. We've got an evil superteam running the world to take down, a super-powered alternative Shazam to defeat, a Justice League to rescue and a Nightwing to bring back to life. The next issue's either going to be ridiculously packed or profoundly disappointing. This issue is serviceable but to be honest kind of uninteresting. It also features Johns' now-obligatory scenes of dismemberment. (2/5)

I absolutely adore Mike Norton's artwork. It has that style that's broadly realistic, but with a very gentle cartoony edge. It heightens the action but doesn't abstract it so far that we don't relate to the characters. For this kind of grounded, creepy horror comic book it's the very best possible aesthetic, and one that many artists have used over the years in numerous classic DC Vertigo titles. This remains to my mind the most Vertigo-esque comic book that isn't actually published by DC. It continues to entertain and intrigue like clockwork. Volume 3 just got released in trade paperback, so seriously: check this book out. I'm getting sick of having to constantly recommend it to you. (4/5)

If the first issue indicated that She-Hulk was going to be Hawkeye style take on its title character, this second issue pretty much seals the deal. We get another quirky, hipster-esque adventure that's essentially done in one issue, and we bring in underused female hero Hellcat as a sidekick and legal firm investigator. It's not quite the awesome book that its first issue was, but it's damned close and still a sensational read. I'm really enjoying these Marvel books - each feels more like an independent film or TV comedy-drama than a superhero comic book. The two-panel spread towards the climax is also excellently played and placed. (5/5)

This has been a simply exceptional read, with one part to go. It's been intelligent, emotional, and has done very interesting work in terms of playing about with the reading experience. It's also wonderful for looking like so kind of weird idiot on public transport and you turn the book around, upside down, and sometimes get forced to read it sideways as well - as if there's some Playboy-style centrefold in there. In all seriousness, however, this continues to be a stellar read and one of the best SF comics of the year. It's a love story, it has aliens, it has time travel, it has war - what else could you ask for? (5/5)