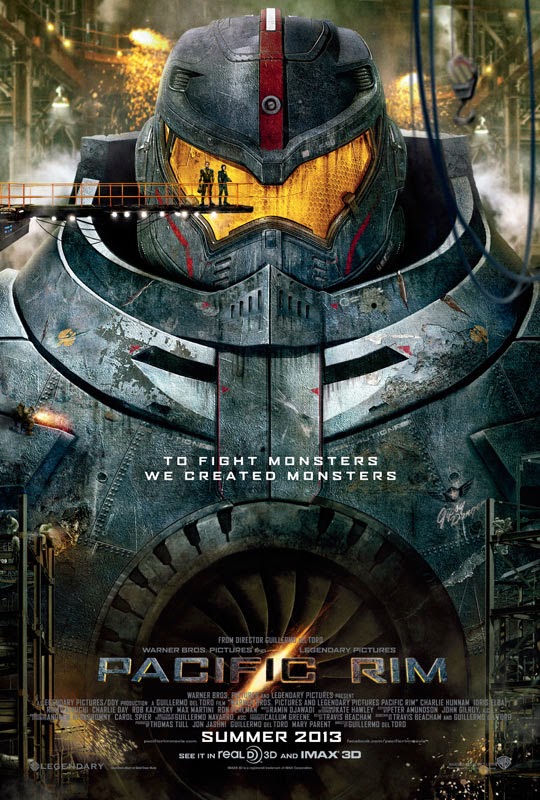 In the Earth's near future, humanity is under near-constant attack from giant monsters known as 'kaiju'. When the funding is cut for the 'jaegers' - giant monster-fighting robots - in favour of enormous monster-defying walls, the agency responsible undertakes one last mission to end the kaiju menace once and for all.

Pacific Rim was in many respects an enormous gamble for Warner Bros and Legendary Pictures: a massively expensive summer blockbuster based on original IP, inspired by Japanese pop culture and without any A-list stars in the cast. It's the work of director Guillermo Del Toro, whose previous works have included absolute class acts like The Devil's Backbone, Cronos and Pan's Labyrinth. Its cast includes several actors whose work I admire immensely, including Idris Elba, Charlie Hunnam and Rinko Kikuchi.

It is also, by the by, absolutely and jaw-droppingly dreadful.

I'm honestly at a loss to explain how this film wound up as bad as it is. It's that worst kind of awful blockbuster, in which the good movie it could have been is visible some way down the road, but the film ran out of enthusiasm, focus, time or money to finish the journey. It irritates where it should enchant. It bores where it should thrill. Ultimately it's a film where there is a certain amount of entertainment value whenever robots and monsters have a punch-up, but where there is very little of worth remaining whenever anything else happens.

For one thing there's the plot: it's highly stereotypical with no surprises whatsoever. Each character has their own childhood or workplace trauma that drives them in the present day. The hot shot pilot doesn't respect the new recruit. The young rookie fights to prove herself. Everyone develops grudging respects by the climax. This is a pity because there's actually some genuinely good world-building going on here, and a relatively believable future society. The film's treatment of Hong Kong is rather Orientalist; I'm not sure whether to be annoyed and shrug that it's par for the course. Certainly the treatment didn't harm its Chinese box office prospects (China was ultimately Pacific Rim's biggest market).

The quality of the production design is mixed. The robots look a little bit silly. The monsters look fantastic, however they do seem more than a little inspired by Capcom's Monster Hunter videogame franchise. They certainly move brilliantly. A protracted action sequence through the ports and harbour of Hong Kong is easily the film's best section.

There's a bizarre amount of shouting. If a line of dialogue can be yelled, it's bellowed out at full volume. To be honest I haven't watching a movie this full of shouting since Zack Snyder's 300. Some of the cast do the best they can, but others are saddled with characters too bad to escape. Burn Gorman and Charlie Day's scientists are particularly irritating to sit through, but the shocking Australian accents come a close second: they sound so actively bad that it distracts from what they're actually saying.

I can see how this film could develop a fan base: it's colourful, it's boldly made and it has giant robots punching monsters in the face. Sadly I'm not one of those fans. Everything about this film irritated me or bored me. Almost everywhere I thought it would excel it failed. I had assumed from the advertising last year that Del Toro had crassly made a live-action Neon Genesis Evangelion with its serial numbers filed off. Having seen his actual film, I now kind of wish that he had.
Posted by Grant at 5:59 PM