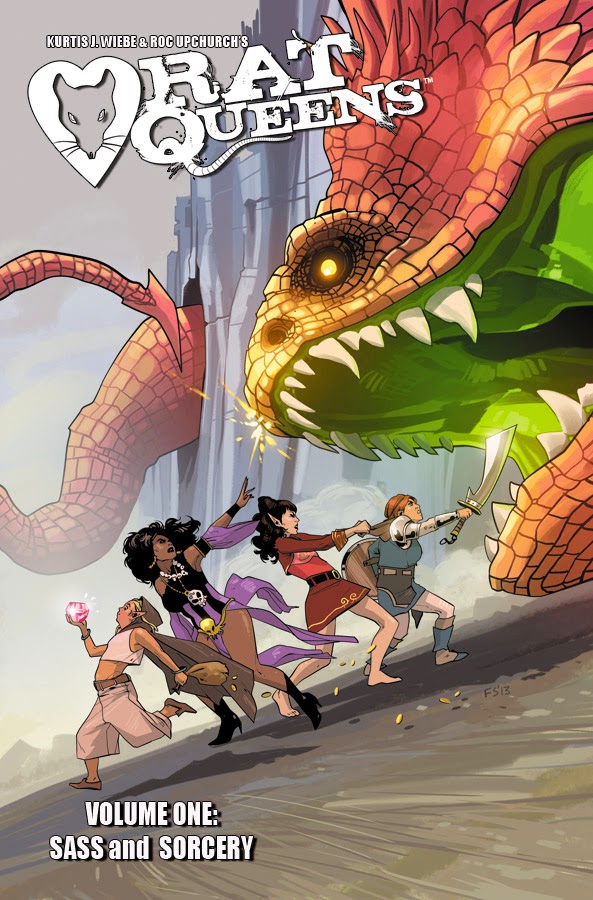 Image Comics has been publishing an increasing range of creator-owned titles in recent years, so rapidly in fact that it's difficult to keep up with them all. One of the books I completely failed to try out was Rat Queens, a fantasy comic by writer Kurtis J. Weibe and artist Roc Upchurch. Since the first trade paperback was released last week, collecting the first five monthly issues, I figured it was time to catch up.

Rat Queens is basically a Dungeons & Dragons campaign in which the stereotypical band of adventurers - the dwarf warrior, the elf wizard, the human cleric and the halfling thief - have been transformed into an all-female team who look and act like your average roller derby team. It's a fast-paced book, and a regularly violent one, and its protagonists swear, curse, take illegal drugs and have sex with people they meet in bars. They use all the words. They engage in table-breaking bar room brawls. Depending on your point of view, it's all adolescent rubbish or it's gut-bustingly hilarious. I am, for better or worse, in the latter camp. I laughed a lot at this book. I will be back for the second trade paperback towards the end of the year.

This book is a deliberate pulp comedy, and a lot of the laughs come from the characters. It's genuinely refreshing to see a book that features four distinctive, likeable and poorly behaved women. I'm sure some will like Dee the best: she's a cleric who doesn't even believe in the religion (horrifying demon squid worship) that gives her her powers. Betty is sure to be popular: she's the kind of halfling who, when tasked with stocking provisions for the mission, brings along a large bag of drugs and candy. I do rather like Violet, who's a hipster dwarf fighter, but for my money the standout is rockabilly elf sorceress Hannah: basically the leader of the team, and certainly the most stylish.

It's not just the leads that I like: the supporting cast is great as well, particularly the Four Daves, a rival team of dungeon-exploring adventurers all named Dave. As someone used to actually play Dungeons & Dragons with three men named Dave, this amused me an awful lot.

Is this high art? No. Will it change the way we read comic books in the future? No. Is it a hell of a fun book? Absolutely. This is fast, funny popcorn entertainment for those who like to occasionally see independent action heriones in a sea of muscle-bound alpha males. To writer Kurtis J. Wiebe  (whose comic miniseries Debris I really loved) and artist Roc Upchurch: you should be proud. Now hurry up and publish some more issues.
Posted by Grant at 5:32 PM