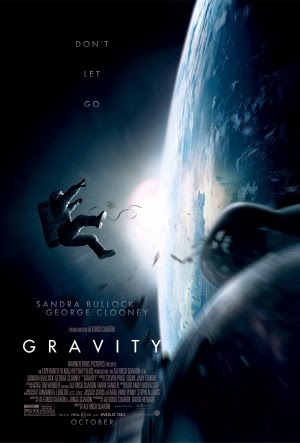 Medical engineer Dr Ryan Stone (Sandra Bullock) and astronaut Matt Kowalski (George Clooney) are in orbit around the Earth, servicing the Hubble space telescope. When a catastrophic satellite collision develops into a wave of lethal debris, they find themselves separated from the space shuttle Explorer and lost in the blackness of space. Their attempts to survive and successfully return to the Earth form the remainder of Gravity.

This is a slightly odd film in that it seems to be falling between the cracks, genre-wise. A lot of people are praising it as an exceptional science fiction film, even though it's not actually science fiction. It's been acclaimed in a way that effects-heavy thrillers very rarely are (including a Best Director Oscar for Alfonso Cuaron), and that's probably because it's unlike most effects-heavy thrillers. Barring a few cameos this film has a cast of two. In a time when movies regularly run more than two and a half hours long, Gravity runs a tight 91 minutes. This film wastes no time. It brings everything it needs with it. It's centred on a strong character played by a talented actor (Bullock) and it never, ever pauses to give the viewer a rest.

Gravity tells a very simple story: Ryan needs to survive, and just when she overcomes one obstacle another rises to take its place. There's never a moment that isn't life or death, and more importantly there isn't a moment that feels forced or unnecessary. It's heightened, but it's believable. It's edited down to exactly what serves the story. Many films could learn a lot from this film's structure. Alfonso Cuaron has been demonstrating through film after film that he's one of the world's best living directors. I think Gravity is his finest work to date.

Visually it's gorgeous, with rightfully Oscar-winning cinematography by Emmanuel Lubezki. I saw the film in 2D, but I can see how it was constructed for 3D - and furthermore I can see how brilliantly it would work in that format. I am not a fan of 3D. I am whatever is the polar opposite of a fan. Despite this, I'd love to see Gravity in 3D one day. It looks like that rare film where the funhouse visuals might actually enhance it.

Also Oscar-winning is Steven Price's stripped back score that knows when to build and when to shut up and let the visuals tell the story. The sound design too is brilliant, and goes a long way to show how fragile the various space stations and capsules Stone encounters actually are.

At the film's centre is Sandra Bullock, who is charged with one of the most difficult challenges for an actor: performing alone. She's separated from Clooney's Major Kowalski for much of the film, and she more than rises to the challenge. If it wasn't for her performance we wouldn't care about the story. It's the best work of her career. I find it fascinating that Hollywood continues to ignore the potential for female-led blockbusters when three of the most successful films in the world last year - Catching Fire, Frozen and Gravity - had female protagonists.

George Clooney has a much smaller role by comparison, and to an extent plays his standard George Clooney persona, but it suits the characters and supports Bullock perfectly.

That word: 'perfectly'. I toy from time to time with the concept of the 'perfect' film, that one where the visuals, the sound, the performances and the script all work in perfect harmony to service the story. The film where everything clicks with faultless precision. Some Like It Hot. Singin' in the Rain. Back to the Future. Groundhog Day. These films are rare. I've seen Gravity twice now, and I'd like to see it a third time, but so far I'm pretty sure it's exactly that: perfect.
Posted by Grant at 9:09 AM