Babylon 5: "Ceremonies of Light and Dark" 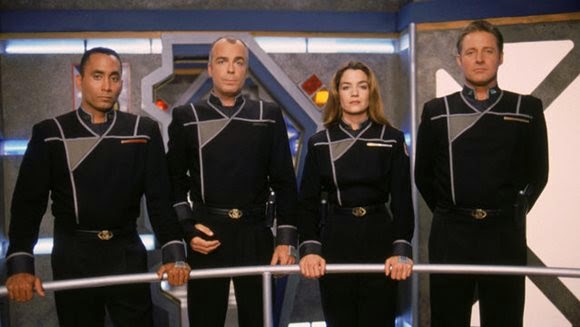 It's been a while since I reviewed an episode of Babylon 5. The last episode, "Severed Dreams", was very much the midpoint of Season 3 - and for that matter the midpoint of the entire series - so it seemed an appropriate time to take a break. Now that I'm watching "Ceremonies of Light and Dark", it seems Straczynski was very much aware of this too, since if nothing else this episode feels like a bit of a break too. It's a chance for the series to pause and collect its breath before diving headlong into the Shadow War.

Delenn leads a rebirth ceremony, allowing the crew of Babylon 5 to reflect and compose themselves after splitting from Earth's government. Garibaldi is left to argue with a hostile A.I. when the computers are reset. Londo challenges Refa over the latter's continued communications with Mr Morden, and his invisible associates. Remaining members of the Night Watch target Delenn for assassination.

Let's start with the episode's best portion, which is the political dance being played between London and Refa. It's classic Shakespearean intrigue, and is played by two fabulous actors doing exceptional work. I love that Londo clearly realises how far down the wrong road he and the Centauri have gone, and it's fertile ground for drama since there's now no way he can drag his people back in the right direction.

Delenn's rebirth ceremony is a bit hokey, which to be honest is a problem I have with much of the cod spirituality in Babylon 5. It does provide for a few nice moments of character, though. Ivanova's simple admission of "I think I loved Talia" completely changes and advances her character: she gets more character development from that one line than a lot of science fiction characters do in their respective series.

The subplot of the Night Watch plotting Delenn's assassination isn't out of place, but it does feel like it was put there out of a fear the episode needed more drama - and to be honest it very probably didn't. It's not bad, just maybe unnecessary and a bit premature. I think the season might have benefitted from this plot being placed two or three episodes down the line.

Sparky the A.I. is a typical Straczynski comedy subplot, which is to say it's painfully unfunny and a chore to get through. The voice of the A.I. is series advisor Harlan Ellison, furthering my belief that these comedy spots were a lot more fun for the cast and crew to make than it was for the audience to watch.

Despite some flaws, this was a pretty enjoyable episode. Certainly I have no problems giving it the thumbs up. That's 11 episodes for Season 3 so far, with eight of them being good: a quality ratio of 73%.
Posted by Grant at 5:55 PM