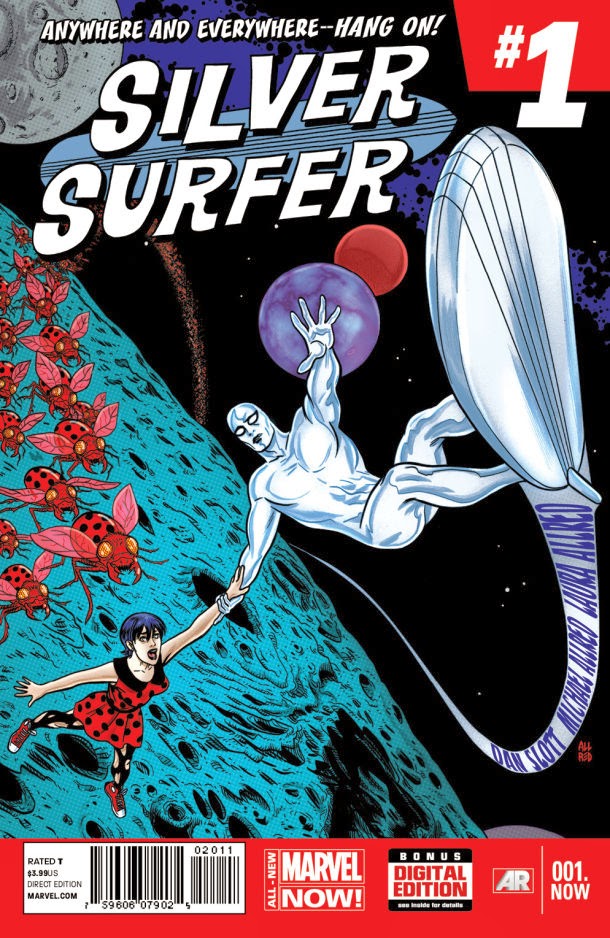 While I've always been more of a DC fan than a Marvel fan, there are a few Marvel characters that I've always liked. My favourite was easily the Incredible Hulk, but I've also had a long-time fascination with the Silver Surfer. He's just so utterly odd. He's a chrome-plated alien who rides around the universe on a surfboard, being generally enigmatic and regularly wracked with guilt over how he used to be the herald of Galactus, the enormous planet-eating space god in purple who wears a silly hat.

There have been long runs for the Surfer in the past, but in recent years he's struggled to maintain an audience. Marvel are clearly hoping that will change, because they're relaunching him again starting this week - written by Spider-Man veteran Dan Slott with art by Madman's Michael Allred.

The thing that's likely to make this iteration succeed where earlier attempts have failed is that Slott has found a fresh hook: this isn't Silver Surfer as a retread of cosmic guilt and weirdness, this is a deliberate pastiche of the BBC's Doctor Who, with the Surfer as the Doctor, his surfboard as his surrogate TARDIS and an unsuspecting young woman from Anchor Bay as his new companion. It's a masterstroke, and Michael Allred's artwork is perfectly matched to it. The first issue is fast-paced, funny and self-deprecating. It's aware of its own ridiculousness and is revelling in it.

I think that in future times people will look back on the history of Marvel Comics and see Fraction and Aja's Hawkeye as a key turning point for the company: more and more often Marvel are emulating that title, giving their IP to intelligent, inventive creators and allowing them free reign to write and draw out of the standard superhero box. We've got Hawkeye, and She-Hulk, and to an extent Daredevil as well. Silver Surfer is another title to add to the list. Damn it Marvel, stop publishing so many books I want to read. (5/5)

Under the cut: a big week, with reviews of All-Star Western, Aquaman, Dead Body Road, The Flash, Guardians of the Galaxy, He-Man and the Masters of the Universe, Manhattan Projects, The Massive, Star Wars Legacy, Survive, Umbral, and The Wake.

I was getting mightily tired of All-Star Western's foray into the 21st century, and I suspect that writers Gray and Palmiotti were too, since their first issue back in the 19th century sees Hex telling a story in flashback to some years previously, and telling a great Jonah Hex one-shot as a result. It was such a refreshing change. Hopefully this book will settle back onto an even keel before it loses even more readers. It's nice having a Jonah Hex comic book around, and it'd be a shame if his weird adventure in the future killed the book. (3/5)

While I've been really enjoying Jeff Parker's run on Aquaman this issue did feel a little workmanlike: not bad by any stretch, but lacking the spark I'd seen in the first few issues Parker wrote. It does introduce a new villain, with promising links to another Justice League member, so it may be the case that this is a linking issue between more interesting ones. Time will tell. Pelletier and Parsons continue to provide great artwork for this book - even when it's average it's still pretty. (3/5)

There are certain things you don't usually see in comic books, and one of those things is a car chase. It's very difficult to present a fast-paced, kinetic action sequence using a string of still images. Dead Body Road, however, rises to the challenge, presenting not just a car chase but an interrogation in the back of a van during a car chase. This is a stunning comic book, boosted immeasurably by Matteo Scalera's artwork - he is a superstar in the making. This isn't to diminish Justin Jordan's writing, which is impeccable, but even Jordan himself admits to how good Scalera is in the book's afterword. (5/5)

This three-part team-up with Deadman winds up in a fairly satisfying fashion - it's been an enjoyable storyline, but an average one. It does leave some lingering questions, however, and time will tell if these get picked up by the next creative team or quietly pushed aside. The Manapul/Buccelatto era of The Flash has been a great one. As they move on next month to Detective Comics, they leave behind a superhero in one of the best situations, creatively-speaking, of the whole New 52. They should be proud: like Batman and Robin, it's a title that's been consistently solid and enjoyable for two-and-a-half years. (3/5)

Guardians of the Galaxy #13

Damn it, Bendis! I was all ready to let go of All-New X-Men, because it felt like it had stagnated very badly after the first 12 issues or so. Now the conclusion of this six-part crossover with Guardians of the Galaxy has me reinvested in that title. Some big changes happen here, that put the future direction of the book into serious question. Plus there's great character development for Jean Grey, Kitty Pryde, Cyclops and Peter Quill. (4/5)

He-Man and the Masters of the Universe #11

Plot twists, action and continuity porn: that's pretty much what I expect from a cartoon tie-in comic like He-Man and the Masters of the Universe. This isn't the best comic book on the shelves by a stretch, and probably only of interest to thirtysomethings who used to play with He-Man action figures, but if you are one of those people then it's pretty much right up your alley. My only main criticism is that the pace needs to be faster. These six-issue arcs are clearly being written for trade paperback collections, and the stories being told don't warrant the length they're being given. (2/5)

I was underwhelmed with the last issue ofManhattan Projects, feeling that the book had somehow lost its way in the current arc. Trust Jonathan Hickman to turn that situation on its head with this brilliant and unexpected issue, that not only resolves some long-running plot threads but manages to completely change what the last three pages of issue #18 actually signified. There's a sort of genius to that kind of writing that you often see when Grant Morrison is at his best: I think Jonathan Hickman has pretty much sealed the deal making him Morrison's natural successor. (5/5)

Another story arc winds up in a nicely climactic fashion, with the book now headed straight towards some well-earned answers. It hasn't always been the most directly engaging and dramatic of series, but it really does feel like The Massive has picked up momentum and is finally fulfilling the potential it demonstrated back when it started. Garry Brown's art remains solid, and is a good fit for the relatively grounded post-apocalyptic tale that Brian Wood is telling. (4/5)

Here's another case of a comic book where my interest was flagging, and one tightly plotted and written issue has completely reinvested my attention on it. This is a great, action-packed issue with Ania Solo on the run on an alien planet from a bounty hunter while her former companions try to work out where she can possibly be. It's boosted by great artwork with a real sense of energy and movement to it. Hopefully this sort of pace and quality keeps up for the rest of the year. (4/5)

This is an issue specifically designed to wrap up the loose ends of Cataclysm: The Ultimates' Last Stand, as well as direct the Ultimate line of comics towards their new status quo from May. It's reasonable enough, and emotionally satisfying - and Joe Quinones' artwork is capable - but it's not entirely necessary. This is a bit of a cash-grab in some respects, keeping the Ultimate line ticking along until the new books are ready. I don't begrudge the move, and I don't begrudge paying money to read it, but it's by no means a required text to start reading the new books come May. (2/5)

After four issues of chases, monsters, demons and thieves, we finally get a well-earned slice of important backstory. These sorts of issues, where characters have to stop and explain what's actually going on, are a very risky manouevre, however Antony Johnston balances it out very well with plot developments and moments of tension blended in throughout. Christopher Mitten's artwork is a delight, with a loose and slightly cartoony style that really matches the fantasy setting. This continues to be an outstanding fantasy comic, and with the first trade paperback due in a month or two you should absolutely check it out. (4/5)

This is a great issue. It's fast-paced, packed with action and littered with cool science fiction ideas. If the last issue was a sharp jump in setting and tone, this issue is more of a relief - it pulls this post-apocalyptic second half closer to the five issues in the present day that kickstarted the whole series. Sean Murphy continues to draw the hell out of The Wake. The destruction of the slave ship in one of the most exciting action sequences I've seen in a comic for a while - between this and Dead Body Road it's a good week for fans of action-oriented comic books. (5/5)

Winner of the Week: Silver Surfer.
Loser of the Week: No real loser this week, although Survive certainly loses the 'must-read' prize for the week.
Posted by Grant at 2:39 PM