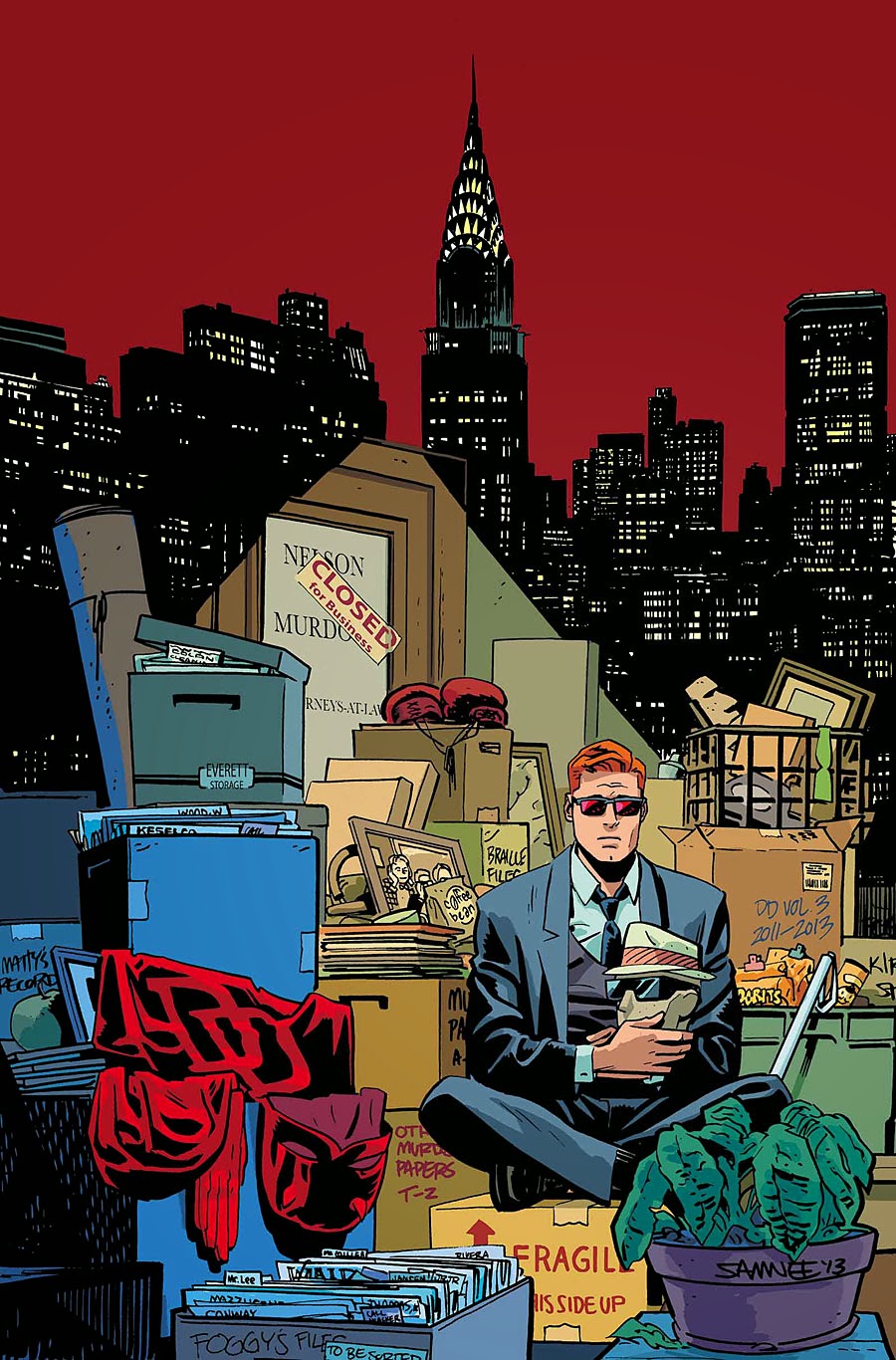 A vacation in Tokyo that crossed two Wednesdays has meant that I'm only now catching up with the past fortnight's comic book releases. Thankfully Wednesday 19 February was a pretty quiet day for comic books, as far as my own pull list goes: four books, starting with the final issue of Mark Waid and Chris Samnee's Daredevil.

It's a cheat, really, because Daredevil continues next month with the same writer/artist team. The only things that are changing are the setting - for reasons made clear in this final issue - and the cover price. I see what you've done there, Marvel; simply raising the cover price from US$2.99 to US$3.99 would elicit complaints from readers, but if you relaunch the book as a whole new volume no one's going to notice. It's a cheap stunt, and completely unnecessary since sales have been pretty steady around the 35,000 unit mark for the whole of 2013.

I'm here to review the book, however, and not the shoddy business practice. Daredevil #36 provides a neat, entertaining conclusion to the Serpent Society arc with some humour, some intrigue and plenty of action. There aren't too many comics where a claim of big changes actually come true. Here they kind of have. It's nice to look back at where this current volume of Daredevil started, and see how neatly Waid has book-ended this chapter of Matt Murdock's life. Samnee's artwork continues to be exceptional.

I'll be onboard in March for the 33% more expensive Daredevil #1. I'll be there grudgingly, but I will be there. Superhero comics this good are arguably worth that extra dollar. (5/5)

Under the cut: reviews of Batman and Two-Face, Batwoman and Wonder Woman. Told you it was a quiet week.

This Two-Face-centric arc on Batman and Robin ends with several bangs, including one which is not only extraordinary effective in the context of the story, but also leaves the reader with a 'wait... did they just...?' response. I came away very impressed: like all of Tomasi's run on this title, it provided a rich and thoughtful insight into its characters and shone a fresh light on one of DC's most enduring villains. It goes without saying that Gleason and Gray's art was excellent - it always is. (5/5)

I'm still deeply irritated at how DC bluntly cut off the last story arc in a fit of pique, and it's made enjoying Marc Andreyko's run very difficult to engage with. What I am seeing I'm liking without loving. It's functional and competent, but the spark that pushed the Williams/Blackman run along is gone, and now it's just yet another Batman spin-off. I'm also a little concerned at the direction Kate and Maggie's relationship is taking, given Dan Didio's edict that no superheroes should be happy or married. (3/5)

Things continue to head up as Azzarello and Chiang's long-running storyline approaches its conclusion. With actual gods involved, you know it's going to get epic and apocalyptic before it gets better. This is one of those issues - I'm written about this before - where it feels as if all of the chess pieces are being manouevred on the board in preparation for a much more exciting issue down the line. While that's certainly the case, Azzarello keeps things moving with a tight, engaging script and strong characters, while Chiang continues to create wonderful and expressive artwork with a minimum of detail. I think his depiction of Wonder Woman herself is my all-time favourite: powerful, graceful and to the point. (4/5)