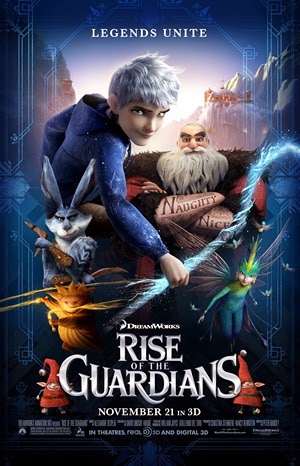 Rise of the Guardians is a film with a hundred different great ideas. Its problem is that it lacks a solid narrative around which to tie those ideas. The result is a wild mess of interesting concepts, pretty production design and absolutely awful plotting and dialogue. I desperately wanted to like the film, but it was adamant in its refusal to let me enjoy it. It's bright and colourful, so small children may adore it. Then again, small children generally don't go looking for plot, nuance, tone or consistency. So depending on your age, your mileage may vary with this one.

Jack Frost, a perpetual 13 year-old boy with the distracting voice of a 30 year-old (Chris Pine), is invited to join the ranks of the Guardians: appointed and immortal defenders of children around the world. There's Father Christmas, portrayed here as a gruff tattooed Russian (Alec Baldwin), the Easter Bunny, portrayed as the most aggressively and gratingly Australian character in the history of cinema (Hugh Jackman), the Tooth Fairy, a manic and ADHD-afflicted hummingbird princess (Isla Fisher) and the Sandman, who is blessedly silent and charming. He's the film's best character. Actually, it's more than that: he's the only character in the film I could actually tolerate watching.

It's a film with no faith in its characters or its concept, since its method of telling their story is to be as fast and as loud as possible without any regard for pacing or structure. Every scene is shot in a combination of whirlwind-fast swoops and glides, rocketing around the locations so fast that it's impossible to appreciate how nicely designed they are. It's a typical DreamWorks Animation film: all sound and fury, with no art or filmmaking prowess to back up the endless cavalcade of pop culture references and jokes for the grown-ups.

It's all a deep shame, because there is a neat idea at this film's heart, and each lead character would excel in their own film. As I mentioned, the Sandman is great. I also love the idea of Santa Claus as a Russian Mafia heavy (probably the film's funniest character, something helped immensely by Baldwin's voice acting). Thrown together, however, and with no room to breathe or properly interact, and it all becomes a shallow roller-coaster ride. It's pretty, but it's soulless. It's colourful and loud, but it's dead inside.

There also seems to be a genuine problem with the idea that Jack Frost, who brings about winter and causes snow to fall and ice to freeze over, should be a guardian of the dreams of children. Ice and snow can kill people. As far as I'm aware, Father Christmas, the Easter Bunny and the Tooth Fairy don't do that. It's also unfortunate that, as the closest thing the film has to a protagonist, Frost is easily the least interesting character of them all. He has a bland design, an inappropriate voice actor and isn't particularly likeable.

Also - and this really is irrelevant in the broader scheme of things - this movie has a terrible title. It's generic and forgettable, and really DreamWorks could probably have just called it The Thing of the Stuff. All week, whenever what I've watched lately comes up in conversation, I mention I watched Rise of the Guardians, and without fail people ask if I mean 'that owl movie', confusing the film with 2010's similarly awful Legend of the Guardians: The Owls of Ga'Hoole.

In recent years the standard for feature animation has become higher than it's ever been. The simple truth is that animation studios can't afford films as mediocre as Rise of the Guardians any more. I think DreamWorks may have learned that, since the film contributed to an $83 million dollar write-down and the laying-off of more than 350 studio workers. Then again, they're the studio of Shark Tale, the Shrek sequels and Kung-Fu Panda. Truth be told they probably haven't learned anything at all.
Posted by Grant at 9:37 PM