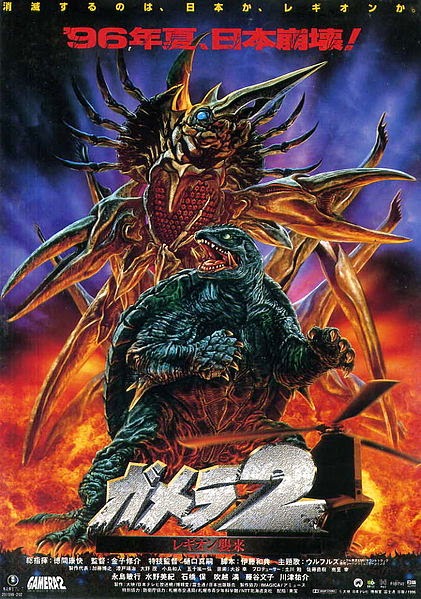 A year after giant monsters trashed downtown Tokyo, a meteorite crashes into northern Japan - bringing with it an alien species with designs on the Earth. They infiltrate the subways of Sapporo, as a massive alien plant grows in the town's centre. With the Japanese military unable to fight back, humanity's only hope appears to be the giant angry space turtle Gamera - so long as he's on the humans' side.

Gamera 2: Advent of Legion picks up pretty much exactly where the last film left off, and pits the titular space turtle up against a new kaiju menace: in this case the electrically inclined Legion. It manifests as a species of human-sized clawed monsters, but also as a massive insectoid monster that towers over Gamera and proves a near-overwhelming challenge.

In terms of story and performances, it's probably not as good as the last film. In terms of visual effects and cinematography it's a vastly superior effort.

There are better giant monster movies, but I'm not certain there are better shot giant monster movies. The Gamera/Legion fights, of which there are several, are shot in a way that really expresses the scale and power of the combatants. A punchup at an air field is a particularly good example, with shots combined model work, CGI, stunt artists in rubber suits and live actors on set and location. It's all blended together to make the most visually dynamic and exciting kaiju film I've seen. And let's be honest: we watch these movies to see rubber suit monsters pound each other as if it's a galactic WWE tournament. That in mind, Gamera 2 is hugely entertaining.

The giant Legion monster deserves special praise. It's potentially the best rubber-suit monster ever created. This is in part to its elaborate, towering design, but it's also because director Shusuke Kaneko (who also directed Gamera: Guardian of the Universe) knows how to shoot a rubber-suit monster to the best effect.

A lot of thought has clearly gone into developing a believable world for the Gamera movies. In one notable moment we see the Tokyo skyline, where the iconic Tokyo Tower is still under repair after being demolished during the last film. The Japanese government has clearly developed giant monster protocols in the wake of the Gamera/Gyaos battle. People act as if they're in a world where giant monster attacks are possible, and react to them in understandable ways.

So all up, Gamera 2 is not quite as good as its predecessor, but its arguably more exciting, and very, very enjoyable to watch. Given you can currently buy all three films in a box set on a region-free blu ray from Amazon for less than ten bucks, you've really no sensible excuse.
Posted by Grant at 9:08 AM