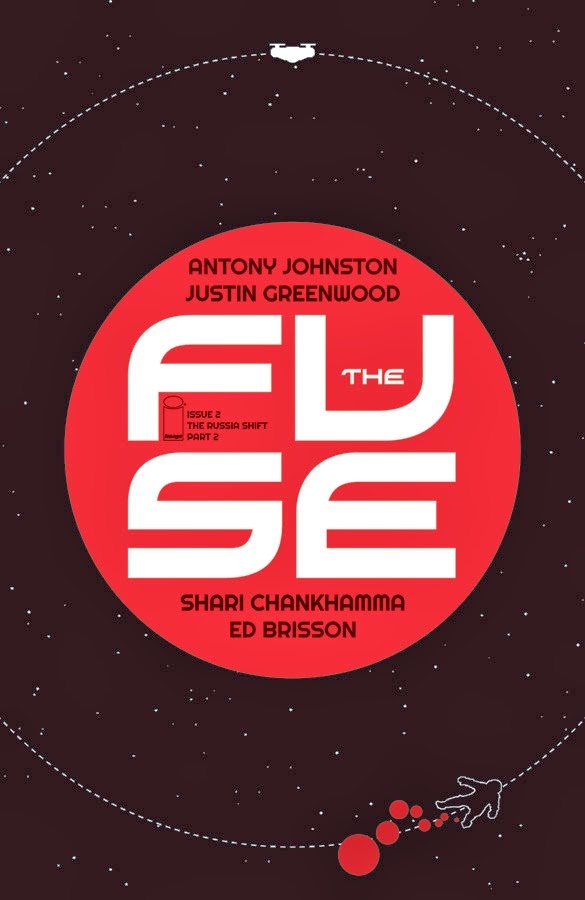 Why are we not singing the praises of Antony Johnston from the rooftops? It feels like he should be a much bigger name in comics that he seems to be. His epic post-apocalyptic comic Wasteland has been a sensational read for some years now, and in the past few months he's launched the exceptional fantasy book Umbral and the futuristic police drama The Fuse.

It has all been stunning work, and he's pretty much guaranteed that if his name is on a comic book I'm going to check it out. He has a near-faultless handle of character, dialogue, tone, pacing and structure. Last week saw the release of the second issue of The Fuse, and it shows off all of his talents in the best possible way. This is a police procedural set on a huge space station and is an excellent blend of those two genres.

Like all good police dramas the action focuses on two mis-matched partners, although Johnston ensures they're a little different from the usual double act you'd see. Justin Greenwood's artwork is wonderful as well, and both the writing and the art create a very believable and well thought-out future society.

I keep planning on paring back the number of comics I purchase each month, and then people like Johnston and Greenwood come along and I wind up buying more. Damn them for being so good. (5/5)

Under the cut: reviews of Batman and Aquaman, Batwoman, Daredevil, Ms Marvel, Sovereign, Thor: God of Thunder and Wonder Woman.

The bodies of Damian Wayne and Talia al Ghul have been taken by Damian's grandfather Ra's, and Batman isn't going to stop until he gets them back. This issue is fast-paced and gripping, and it's nice to see a team-up between Batman and Aquaman. It's also great to see the ending of Batman Incorporated revisited, with Ra's continuing to breed himself an army of grandchildren with which to do his bidding. The only thing I'm unsure of is this story arc's endgame: there's a big problem with characters dying in a universe that includes Ra's' Lazarus Pits. Surely resurrecting him is something that Bruce wants? (4/5)

I'm getting back into Batwoman more and more, as we slowly retreat from DC's incredibly inelegant conclusion to the Williams/Blackman run. The word that keeps coming to mind with Andreyko's run is "solid". It's not jaw-droppingly original, and the art is not particularly distinctive, but it does its job and is being consistently entertaining. It is, however, in danger of falling into the same trap as Batwing: that book started as something quite distinct to the other Batman titles and is now effectively "the African-American Batman". I worry Batwoman may go the same route: yet more Batman, only starring Kate Kane instead of Bruce Wayne. (3/5)

The much-hyped relaunch of Daredevil has arrived, and as I suspected it is - for all intents and purposes - issue #37 of the last volume. The writer hasn't changed, the artist hasn't changed, the tone and the characters haven't changed. All that's changed is the location - San Francisco instead of New York - and the cover price - $3.99 instead of $2.99. It's a predictably strong issue, and certainly it does function as a great jumping-on point if you missed the last volume, but that extra dollar does sting more than a little - particularly given the shocking paper quality of Marvel comics these days. (4/5)

Kamela Khan starts to explore her newfound superpowers, while butting heads with her traditionalist parents. This is simply a flat-out entertaining comic book, with a brisk pace, great cartoonish artwork and genuinely likeable characters. I really like the bright, believable protagonist that Wilson has created, and the light-hearted and enthusiastic tone of the book suits Alphona's art style perfectly. This is definitely a book that deserves success, and with DC in particular failing to create too many appealing teen superhero books of late, this is one that fans could easily jump companies to read. (5/5)

Well they can't all be winners. Image has been on a winning streak for the past few years, with a seemingly endless string of brilliant comics across a range of genres. I was hopeful that Sovereign, their latest fantasy title, would be another book to add to the list. Instead it's a very saggy, unfocused book of horse lords, sea monsters and magicians. There's clearly thought put into the world-building, and some kind of long-term game plan. None of that matters, however, if the first issue is as unfocused and weak as this one. It doesn't really have a structure. It just jumps from plot to plot until its page count is used up, and then it ends. This book might get better in future, and certainly it might be an easier read when collected into trade paperbacks, but for now it's a huge disappointment. (2/5)

This is shaping up to be as good an arc as Aaron and Ribic's earlier "Godkiller" storyline that launched God of Thunder last year. In the present Thor and a SHIELD agent take on the Roxxon Corporation. In the far future, old Thor battles Galactus over the remains of the Earth. What's not to like? I love old Thor, and his granddaughters, and Ribic's art remains outstanding. I also like that in the present-day part of the comic Thor has been paired with such a strong female co-star. I really hope we see more of SHIELD Agent Roz Solomon - she's awesome. (4/5)

Wow. All of the character arcs and threads of the past 10-12 issues all seem to run into each other at once in this issue, which manages to set up a phenomenal climax for the next few issues, bring about a major game change for the title's immediate future, and wrap up with an ending that will please many of the Wonder Woman fans who got so annoyed at the book's first few issues back in 2011. This is an outstanding issue of an outstanding comic book. From the get-go Azzarello has been writing a bold and provocative take on Wonder Woman, and it's paid off marvellously. Chiang's art constantly impresses me with how much expression he can get out of so few pen strokes.  (5/5)