Star Trek: The Next Generation: "We'll Always Have Paris" 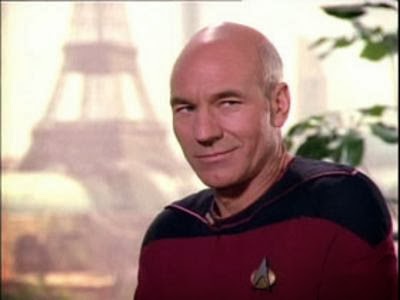 The Enterprise comes to the rescue of the reclusive scientist Dr Paul Manheim, whose experiments are causing ripples in time across the sector. For Captain Picard the mission reunites him with Manheim's wife Jenice - with whom he shared a brief love affair many decades earlier.

"We'll Always Have Paris" is one of those episodes where, despite more than a few decent ideas and moments, by the end you're quite happy to move on and forget that you had ever seen the thing. It's disposable television, which isn't in itself a bad thing, but when it comes to assessing whether it's worth ever watching again or not it kind of wobbles on the fence. Whatever direction it falls in is likely up to the individual viewer. For me it falls into the 'could quite happily never see it again' camp, but your mileage may vary.

The romantic scenes between Picard and Jenice Manheim lack spark, although the production team subsequently blamed that on the script's truncated development. By the time Season 1 was nearing the end of production an industry-wide writer's strike was leaving a lot of teleplays unfinished, and certainly this episode feels like what it is: an early draft that's been patched together and filmed. It's a bit too flabby and a bit too dull, and it's clear one proper polish could have improved things considerably.

There is more value in some of the scenes depicting the time eddies that Manheim's work has created, particularly a scene with Picard, Worf and Data seeing their own future selves, and a climactic sequence with three Datas working in unison to shut down Manheim's experiment.

As I said, though, in the end it's all rather dull and disposable. A pity: this leaves Season 1 with seven good episodes out of 23, or a quality ratio of 30%.
Posted by Grant at 11:03 AM