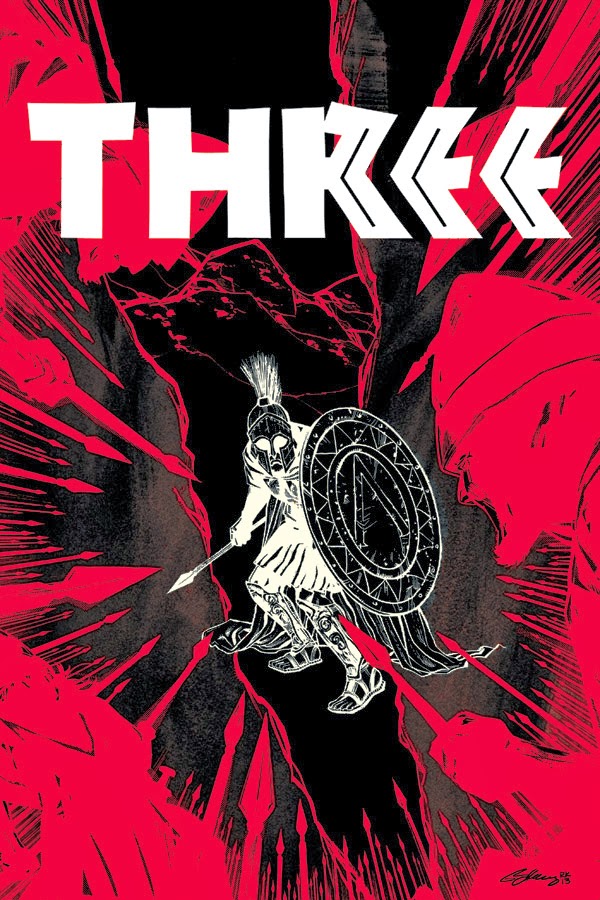 I am slowly catching up in regards to updating this blog. Here, at last, are my thoughts on comic books from Wednesday 26 February - starting with Three.

For the past five months I've been enormously impressed by Three, Kieron Gillen's intelligent, thoughtful and historically accurate response to Frank Miller's loathsome graphic novel 300. The final issue was published last week, and it gives Gillen's story a beautifully rendered, wonderfully bittersweet conclusion. Once collected together this is going to be a great historical adventure to read in one sitting, and to give away as a gift for friends and the like. I enjoy giving a way a nice graphic novel, and I can think of several friends already who'd really enjoy this book.

As one might expect given a comic miniseries about Sparta, the ending is more than a little brutal and not entirely happy. It is, however, a gripping and tremendous read. The multi-part interview Gillen has been conducting in the final pages with an English history professor on the actual Spartans has been genuinely interesting reading.

I simply adore the idea of responding to a work of art with another work of art. While I personally dislike 300 quite intensely, I do think it's worth reading it first in order to fully appreciate the beauty of what Gillen and artists Ryan Kelly and Jordan Belaire have achieved here. (5/5)

Under the cut: reviews of All-Star Western, Aquaman, Black Science, The Flash, Guardians of the Galaxy, Hawkeye, Manhattan Projects, The Massive, Star Wars Legacy, Umbral, The Wake and Worlds' Finest.

I simply don't understand what Palmiotti and Gray are doing with this comic. While they've finally (and abruptly) returned Jonah Hex to the 19th century, they've taken the opportunity to heal his face - pretty much the most visually distinctive part of the character. This used to be one of my favourite books in the New 52, but I'm growing increasingly dissatisfied with what I'm getting. It's a shorter book than when it started, but it's still $3.99 an issue. That's a lot for something I've stopped enjoying. (1/5)

I have really liked how smoothly Jeff Parker has picked up the reins on Aquaman and kept the book running in such a seemingly effortless manner. Most of the time a new writer means a completely new take on a character, with long-running storylines and popular characters getting thrown overboard in the process. This isn't the case here: all of the stuff Geoff Johns set up is still there, and continuing to develop nicely. A new Aquaman book kicks off next month: who'd have guessed three years ago that the market would support not one but two books about him? (4/5)

I'm struggling to remember who is who in this book, which is starting to prevent me from fully enjoying it. That's a shame, because this dimension-hopping book is fast-paced, full to the brim with cool ideas and boasts brilliant Matteo Scalera and Dean White artwork that looks like it's leaped out of a French hardcover. It's possible I just need to pull the other three issues out and re-read the whole thing from the beginning - thankfully it's been so entertaining thus far that this won't be a chore. (3/5)

Brian Buccelatto's farewell tour of the book he's co-written since the launch of the New 52 continues. It's a team-up between the Flash and Deadman, which makes it a particular treat for me: I adore Deadman, and since he's never really been popular enough to sustain his own series it's always nice to see him hijack other characters' titles. This isn't breaking any new territory, but it is telling an entertaining superhero story with some nice supernatural elements. (3/5)

Guardians of the Galaxy #12

The "Trial of Jean Grey" continues with this fourth instalment, and it's a much less funny and urgent work. To be honest this issue felt a little like padding to me: there was a driving pace behind the first three parts that's partially dissipated. There are only two more issues to go, which also worries me a little. Part of the problem is that this issue heralds the return of the Starjammers, characters I've never read before and of whom I am only vaguely familiar. Those more immersed in X-Men lore might find a lot more to enjoy here. Asides from all of that, I adore Sara Pichelli's artwork. It's worth stating the obvious from time to time: she's brilliant. (2/5)

It's Hawkeye #15, released after #16, for reasons only Marvel could tell you. The slippage on this book is getting out of control. While it might have seemed a clever idea to give David Aja more time by splitting the book into alternate issues with different artists and protagonists, in truth it's made these Clint Barton-centric issues more and more excruciating. How slower could this story arc be? I love this book: it's always well written and boasts wonderful artwork. On the other hand it's just moving so slowly. I'm close to dropping it as a monthly and just waiting for the trade paperbacks. (3/5)

This issue's pretty heavy on action, which really doesn't gel with the tone of Manhattan Projects as a whole. There's decent interplay and characters here, but this whole book has been feeling weaker than usual of late. I'm looking forward to the current siege storyline to be resolved, and hope Hickman can find a direction again - at the moment it feels all over the place. Pitarra's art remains distinctive, unusual and engaging. It's just not the greatest fit for what Hickman's writing at the moment. (2/5)

It really feels that, month on month, this book is pulling towards some kind of resolution or climax. This is a good thing: it's always been a fairly dry read, so anything that can spark up the energy levels is fine by me. The world-building is what has me intrigued here rather than the characters: Wood has established such a believable post-crash environment for the planet Earth. It's eerily convincing, and somewhat disturbing. (3/5)

Ania Solo has been kidnapped, and while her friends race to find her they begin to question exactly who she is. Despite some nice touches back to the Star Wars movies, I have to admit my attention with this book is beginning to flag. Without a big jump in storytelling in the next month or so I may drop it entirely. After all, the book's only got 10 months left before Dark Horse lose the rights. (2/5)

This remains, four issues in, a knockout dark fantasy comic. It's got a lovely scabby kind of edge, basing itself around fringers, smugglers and thieves as the weird ink-black demons chase relentlessly after our heroine. This issue features ghost pirates, or pirate ghosts, I'm not sure of the correct way to describe them. They were pirates, then they died, but now that they're ghosts they're still pirates. At any rate it's really good stuff, and something all fantasy fans should be checking out. Christopher Mitten's art continues to impress me: it's beautiful and wonderfully atmospheric too. (4/5)

The second half of Snyder and Murphy's impressive science fiction series begins here. It's an unusual storyline, since the first five issues focused on a team of contemporary marine biologists discovering a deadly intelligent species under the ocean. Issue #6 jumps forward more than 200 years to reveal a water-logged dystopia where humans are rapidly dying out and the strange underwater creatures have taken over the planet. It's smart, exciting stuff, and the jump has been handled exceptionally well. This is one of best comics out there at the moment.  (5/5)

This issue was pretty confusing, because it's part 2 of a story whose first part occurred in Batman Superman, a book I don't read. As a result it's quite difficult to make heads or tails of what's going on. Certainly the interplay between the characters is entertaining, and it's great to see Huntress finally interact with her father. I just wish they'd keep these stories to the one book, because right now it feels like I've wasted my money on half of a story. (2/5)