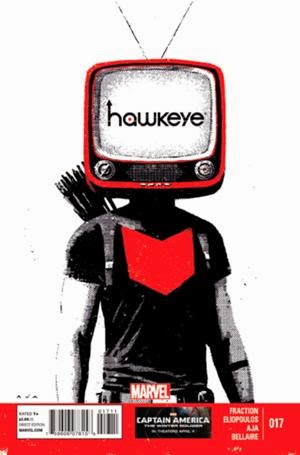 Last week saw the release of Hawkeye #17, and to say that this issue was a surprise is an understatement. Sadly the surprise was not a pleasant one.

This book has been repeatedly delayed, so much so that - bizarrely - issue #16 was shipped before issue #15. Now that it's March we're finally getting the Christmas issue, and it's basically a children's cartoon about cute animals saving winter while Clint Barton (the book's actual star) sleeps on the couch. Some may see this is a hilarious gag, but I personally felt profoundly ripped off. It's not particularly funny. Eliopoulos' guest artwork is sloppy and lazy.

I can see the thought process behind the issue, since the cartoon characters clearly represent the characters from Hawkeye, but the execution is nowhere near clever enough to justify the issue.

It's the sort of issue so deeply misjudged, and so unremittingly awful, that you begin to question why you're buying comics at all - let alone buying this title. I think the quality of the first 12 issues of Hawkeye earned Fraction and Aja a lot of kudos and a lot of leeway to be late, so long as the quality held up. The quality hasn't. The leeway is used up. Hawkeye needs to get better, and get regular, or I suspect readers will begin to leave in their thousands. (1/5)

I read All-New X-Men as a result of reading the "Battle of the Atom" crossover, and while I liked the idea of the original X-Men travelling into their future and meeting their present-day selves, I liked it in the sense that it would make for an interesting story arc. We're now 24 issues into that arc, and it's simply dragging out too long for me to remain invested in it. With the money I spend on this book I could be buying tighter, more interesting comics. So this is my final issue for All-New X-Men. I'll finish up the "Trial of Jean Grey" crossover in the next issue of Guardians of the Galaxy, but that's it. This circus act is just taking far too long. (2/5)

This issue is, for the most part, really entertaining, with Batgirl and Strix teaming up to stop a madman who believes Batman and his followers are all vampires. It even has a great plot development partway through that I didn't see coming. Pasarin and Glapion's artwork is solid. Then there's the last minute deus-ex-machina ending which goes a long way to making the rest of the story a pointless read. This would have scored four, but that ending loses it a point. (3/5)

After a one-issue sojourn into the future, we're back in the past as the Riddler's deadly masterplan reaches fruition. This is, rather predictably, a stunning issue. It's action-packed and runs at a breakneck pace, the tone is getting positively apocalyptic, and its depiction of a younger and less experienced Batman hits exactly the right notes. Even though Snyder, Capullo and Miki are re-telling a story we've read many times before, they're doing it in a way that feels contemporary and fresh. The nods to the comic's past continue as well, with hordes of visual imagery and references to please the long-term fan. (5/5)

Now that we're well into Oliver and Rodriguez's strange science fiction book I'm getting a much firmer grasp on what I think of it. It's definitely second-tier stuff for Vertigo - it's hardly going to be remembered in the same breath as Preacher or Transmetropolitan, for example - but it's still a solid and intriguing comic with some very big science fiction ideas. I'm particularly into Robbi Rodriguez's distinctive artwork. This is a very good comic that doesn't quite seem to manage becoming great. (3/5)

This Legion of Super Heroes replacement staggered haphazardly out of the gate, sort of entertaining but at the same time slightly uneven and occasionally irritating. With the fourth issue we suddenly get some clarity and some genuinely clever writing: these clones of Superman, Batman, Wonder Woman and Green Lantern are not what they appeared to be, and the truth is actually a great bit of horror thrown unexpectedly into the mix. Even with the sudden increase in quality within the writing, the real star for me remains Howard Porter's career-best artwork. It looks stunning - and now it seems it may have writing to match it after all. (4/5)

Lewis and Clark's expedition finally makes a break from the abandoned fort to their boat, and the survivors make the decision to tackle the plant zombies head-on. I love it: American colonial history gets spiced up with monsters, body horror and the supernatural. The final splash page is an awesome cliffhanger, and now that we're five issues in I feel pretty safe calling this one of Image's best new comics. The artwork in particular is awesome. The first trade paperback is due in a month or two, so make sure you check it out. (4/5)

After the wonderful two-parter featuring Darth Vader, it's actually a weird let down to be back with Luke, Leia and the Rebel Alliance again. I wasn't entirely engaged with the premise for this new arc - Princess Leia agrees to marry an alien prince to secure a new base for the Alliance - and now that I've read the first part my worries are pretty much confirmed. Writing a comic book set between two movies was always going to be a challenge - we know where the characters end up, so in this case we know the marriage isn't going to happen. As a result the entire arc feels futile. Stephane Crety's artwork feels off as well: none of the characters really look like their live-action counterparts, which is distracting. (2/5)