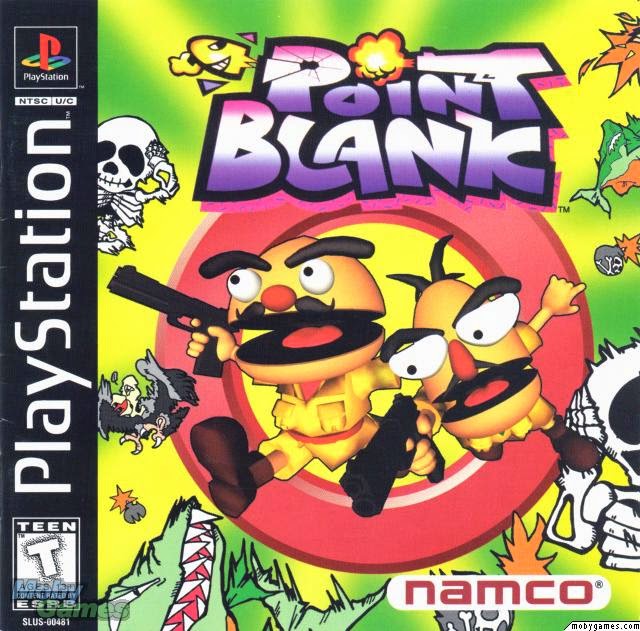 PSX20 celebrates the 20th anniversary of Sony's Playstation videogames console by counting down my 20 favourite videogames for that platform. These aren't necessarily the best PSX games ever made, but they are the ones I liked and played the most.
Gun peripherals certainly aren't anything new: the Nintendo Entertainment System sold a lot of units based on the popularity of Duck Hunt, for example. The Megadrive had the Menacer and the SNES had the weird bazooka-like Super-Scope. To be honest I don't think it was until the PlayStation's GunCon that there was a gun controller that actually worked. It was developed for the console by Namco for use in ports of their then-popular light gun arcade games.

I spent a lot of time playing Time Crisis on my PlayStation. That said, I still think the best GunCon title was Point Blank. The arcade game came out in 1994, and the PSX adaptation was released three years later. It's a collection of mini-games, sure, but they're great mini-games and the whole package was simple, breezy and highly addictive.

There's a very pleasant non-violent style to Point Blank. You may be using a gun, but you're using it to shoot colourful targets, UFOs, cardboard cut-outs of bad guys, and so on. The levels are short, fast and frantic. It's ridiculously silly, and that made it a fantastic videogame to have in the corner at parties.

The PSX edition added a lot of extra value on top of the arcade game, including specific Party Play modes and even a weird sort of RPG mode. It's true that, even with the extra modes, there wasn't a great deal of content in Point Blank. The whole package was so addictive, however, that it wasn't really a problem.

A less popular sequel followed in 1999, and a third iteration was released internationally but not, strangely, in Japan. More recently the franchise was adapted to the Nintendo DS as a touch-screen title, which is cute but not really the same thing.
Posted by Grant at 10:53 AM