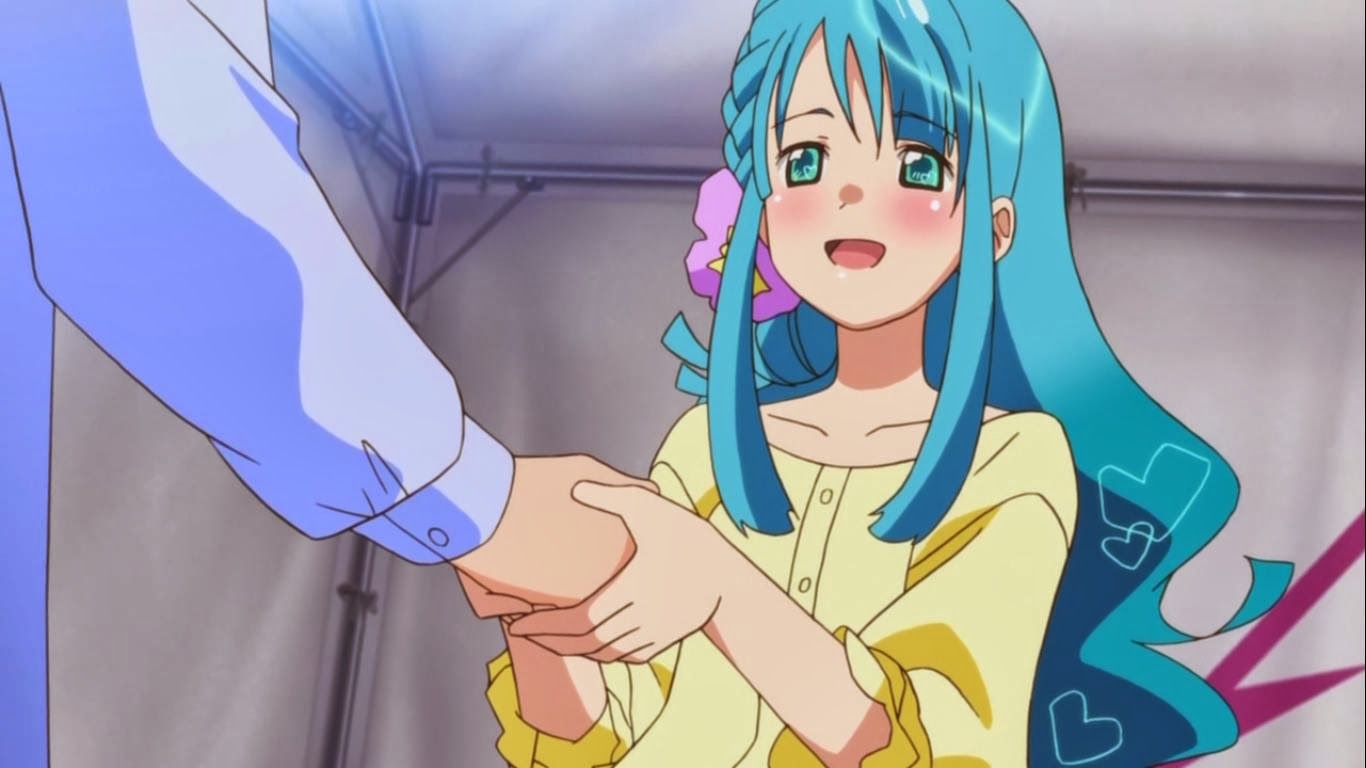 While the trainees prepare to make their public debut at a handshake event, Orine receives video-recorded hate mail that shatters her confidence. Will the public accept the new performers, and will Orine recover her nerve in time to make a good impression?

Despite that fairly mundane description, there is actually a nice amount of action in "Their First Handshake Event" - assuming lightsaber microphone wielding pop starlets versus interplanetary shock troopers combat is something that interests you. It's a relief to see this kind of ridiculous mash-ups of genres returning to the series, because it's been missing since the second episode and it's exactly what got me enjoying AKB0048 in the first place.

That said, there's something quite off about this episode. The conclusion to Orine's personal crisis is that 'haters' are actually great people, because they can provide valuable criticism that the artist can then take on board. That's a somewhat repellent suggestion to me: sending somebody hate mail is just a cowardly and spiteful act. It's not intended to educate the artist but scare, disgust or otherwise offend them. It feels like something inserted by the real-world AKB48 empire to appease its fanbase, who can get quite upset when one popular member of the supergroup retires and a new girl takes her place. If that's the case, I'd have much preferred they demand an episode where Orine shakes her masked teenage hater by the shoulders and kicks him somewhere delicate until he agrees to move out of his parents' basement. I'm guessing, however, that this isn't the series for that.

Handshake events are weird. Basically members of the band sit along a table and greet long queues of their most ardent fans: young girls, teenage boys, overweight middle-aged men. I was actually in a ballot to go to a real-life AKB48 handshake event a few weeks ago, but sadly (or thankfully) my number didn't come up. I'm not sure how strange it would have been. I'm fascinated by AKB48 as a cultural phenomenon, but 10 minutes inside their Akihabara cafe and shop left me ambivalent about investing time in the band too much. The 'creepy otaku' quotient is disturbingly high.

There's also a bikini photo shoot at the beginning of this episode. My word, do I loathe fan service, but I'm guessing the creepy otaku from the AKB48 cafe thought it was great.

So despite the welcome return of the action during this episode's conclusion, it actually irritated me quite a bit and I don't feel comfortable giving it the thumbs-up. That leaves AKB0048 with four good episodes out of six so far, or a score of 67%.

By the way both seasons of AKB0048 are available on DVD in Australia now, in case you want to have a copy of your own about which to be vaguely embarrassed.
Posted by Grant at 7:16 PM