Doctor Who: "The Ambush" 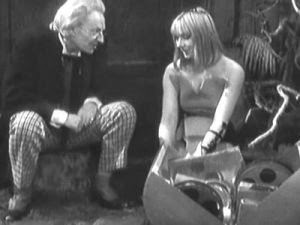 With Ian controlling one of the Dalek machines from within, the Doctor and his companions attempt to escape from the Dalek city - only to discover the Daleks plan to ambush and kill the visiting Thals. Ian rushes to warn them: but will it be in time?

"The Ambush" is a rather exciting instalment of "The Daleks", pretty much broken into two sections. The first, in which the TARDIS team make their escape from the city, is probably the better section, but the episode as a whole is still an entertaining experience. For one thing the Daleks themselves take things up a notch by finally discussing 'extermination'. It's a brilliant word for them to use: for most viewers it's just a catchphrase, but the very use of it speaks volumes on Dalek society. You might kill or murder other people, but you exterminate pests and vermin. I was also intrigued by a large stone sculpture that the TARDIS team push into a lift shaft to prevent a Dalek from reaching them: for all their genocidal tendencies, Daleks have art.

We're still just eight episodes into the series, so the focus of the regular cast is still very much on escape rather than fighting evil. They decide to aid the Thals not because it's the right thing to do, but because the Thals gave them anti-radiation pills and they feel obliged to repay them. It's still Ian and Barbara's show as well: it's Ian who warns the Thals of the Daleks' treachery, and Ian and Barbara who insist they help the Thals further. The Doctor is still rather selfish and cowardly, and remains a supporting character in his own series.

The Dalek's ambush is a beautifully staged scene. The episode's director, Christopher Barry, cleverly juxtaposes the Thals naive approach to the city with extreme close-ups of the Daleks' twitching guns. It's another beautiful illustration of the Daleks as characters rather than simple monsters: they can barely contain themselves from jumping out of cover as soon as the Thals approach and start exterminating them to death. I think there's a reason the Daleks grabbed the public's attention so vividly. While Ray Cusick's iconic design went a long way in doing that, it's often overlooked just how well they are written the first time around.