Star Trek: The Next Generation: "Conspiracy" 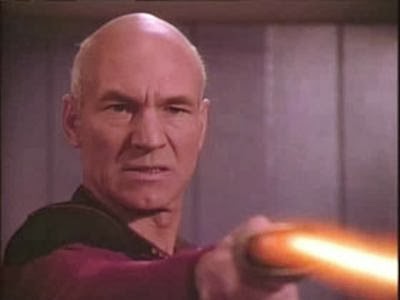 Captain Picard is summoned by an old colleague to a covert meeting: someone, or something, is infiltrating Starfleet. No one can be trusted. With his allegiance sorely tested, Picard sends the Enterprise back to Earth in order to investigate.

So this is The Next Generation's first sequel, seeing as it follows up directly from "Coming of Age" in which Picard was first alerted to a potential conspiracy to take over Starfleet. It's also the darkest and most macabre thing the series has developed to this point. I'm trying to think right now, and I'm pretty sure the series never gets this graphic again. There's one climactic shot in particular that's so gory that the episode was initially banned from broadcast in the UK and came with a pre-episode warning in Canada.

So it's controversial, and kind of confronting, but is it any good?

To be honest I'm somewhere on the fence. It's not a fantastic episode by any stretch, but most of my criticisms are with how the episode was treated after it was made rather than anything in the episode itself. It sets up a quite shocking conspiracy to overthrow Starfleet and the Federation, introduces a dangerous species of malevolent alien parasites, and concludes with the revelation that a signal has been sent out into deep space to alert more of those parasites of what's going on. Then, crickets.

The series never returns to this storyline. Given that this episode is almost entirely set-up, that makes the whole exercise somewhat hollow and pointless. Sure, the novels follow up on it eventually (it makes the parasites a mutated breed of Trill symbiote, which is interesting while also being the height of 'fanwank') but that hardly counts for the series itself. Had the parasites story arc actually continued on and become something, I might remember this episode more fondly.

That said, there is stuff to recommend. The destruction of the USS Horatio is a nicely foreboding sequence that successfully raises the stakes. The episode introduces a new species to the series in the shape of the Bolians (named after this episode's director, Cliff Bole). The revelation of the conspiracy's true leader is a relatively neat twist. The episode's tone also does make for an interesting contrast to the rest of the season: it doesn't gel together, but it's nice to see them trying to find new angles for the show.

So it's a weak vote of confidence, but a vote nonetheless. 24 episodes in, and Season 1 has eight good episodes. That gives us a total of 33% with just the season finale to go.
Posted by Grant at 10:05 AM