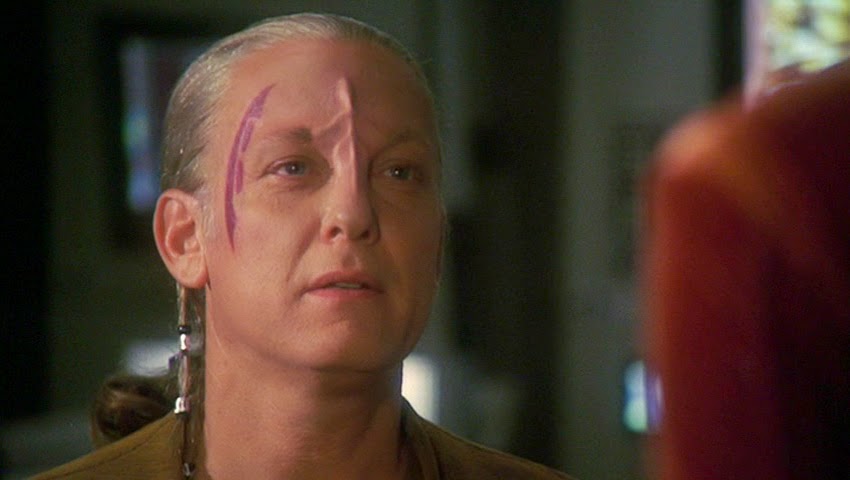 The Enterprise rescues a community of religious aliens, only for the aliens to take over the Enterprise and hold the entire crew hostage using suicide bombers. The religious leader announces his plan to use the Enterprise's advanced weaponry to end a lengthy civil war on his home planet.

I get the impression, watching "Chosen Realm", that the producers probably thought they had something quite edgy and contemporary. The episode was broadcast less than two-and-a-half years after the September 11 terrorist attacks in New York, and it features religious zealots and suicide bombers. This got me rethinking the entire third season, since it is based around Starfleet sending the military into enemy territory following a devastating terrorist attack, and it was broadcast during a time when the USA was invading Afghanistan and Iraq.

Go back to the 1960s: Star Trek presented us with a communist utopia right in the middle of the Cold War. It preached peace when America at large was neck-deep in Vietnam. It was, despite being populist entertainment, a willingly subversive and challenging series. I'm now wondering when Star Trek the franchise lost its way, since Enterprise is effectively towing a Republican Party line. War is good. Religion is bad. Let's send the soldiers into enemy territory and show the bad guys what-for.

"Chosen Realm" is, therefore, nowhere near as provocative as it seems to think it is. There's no muddying of the waters or complexity here: credulous religious fanatics take over the ship, and Archer's crew eventually take it back by force. There's a bit of lip service at the end towards more traditional Trek values: the religious leader, D'Jamat, finds his home planet is a desolate wasteland due to religious war. Lesson learned, and the Enterprise team can head off on their mission to destroy the Xindi having learned nothing at all.

D'Jamat's religion is deliberately rendered so as to be farcical: an entire species split because one sect believe the universe was created in nine days and the other sect believe it was ten (as they're a lazy science fiction race, naturally they only have one religion). It's kind of shocking that this episode was produced only a few years after production wrapped on Deep Space Nine. That series had a complex, respectful and nuanced view of religion and spirituality. Enterprise is openly mocking it.

The episode is also riddled with inconsistencies: D'Jamat's people strictly refuse medical scans as it would be against their religion, yet happily inject themselves with chemicals to turn their own bodies into bombs. You could make an argument that they refused the scans to avoid having their internal bomb chemicals detected, but the episode itself fails to make that connection: it's up to the viewer to decide whether the writing is subtle or thoughtless.

Now it may seem I'm being needlessly harsh on episodes of Enterprise while at the same time giving similarly dodgy episodes of The Next Generation a free ride. The fact is that there are 589 episodes of Star Trek between "Encounter at Farpoint" and "Chosen Realm": they've had more than enough time (nearly 400 hours of screen-time) to know that this sort of episode simply doesn't cut it.

Only six good episodes out of 12 leaves Enterprise Season 3 at exactly 50%.
Posted by Grant at 8:20 PM